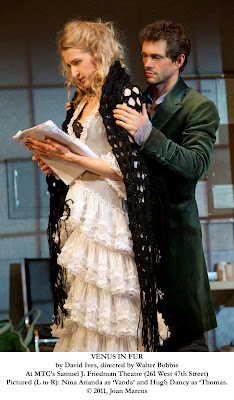 Audition Turns into Another Kind of Role Playing
By Lauren Yarger
Nina Arianda recreates the role which brought her acclaim in her Off-Broadway debut last season in David Ives Venus in Fur, now in a Broadway run produced by the Manhattan Theatre Club.

As lines and scenes from the script are read for the audition, reality and fantasy blur as emotions and desires of Vanda and Thomas mimic those of the characters. Arianda and Darcy give charged performances and under the direction of Walter Bobbie, slip seamlessly, sometimes in mid sentence, between the characters in the play and the characters portraying them. It's really good acting.

While the performances are excellent and Ives incorporates a lot of humor in the script, there isn't much purpose to the play beyond being a study of desires around domination, submission and sadomasochistic sexual practices. A sexual tension builds with the actors reversing roles to see who will be dominant and in control. The "surprise" ending isn't, really, and personally, I can think of more worthy subjects then S&M on which to spend an hour and 45 minutes.

Christians might also like to know:
--Language
--God's name taken in vain
--Goddess
--Sexual activity and dialogue
--Dialogue about sadomasochism
Posted by LaurenYarger at 4:11 PM