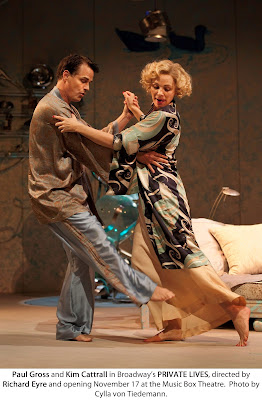 A Marriage on Display Still Can Be Private
By Lauren Yarger
The honeymoon is over even before it begins when Elyot (Paul Gross) and his new bride, Sybil (Anna Madeley) arrive for their wedding night at a hotel room next to the one shared by his ex, Amanda (Kim Cattrall, ), and her new husband, Victor (Simon Paisley Day), also on their honeymoon in a Broadway production of Noel Coward’s Private Lives.

Elyot and Amanda discover each other across the terrace, and try to hide the unfortunate coincidence from their rather uptight respective spouses who just wouldn’t understand. The loathing they have felt for each other during the five years they have been divorced suddenly turns to longing as the couple realize they still have feelings and decide to abandon their new spouses and run off to Amanda’s apartment in Paris.

They soon are drowning (literally, as Rob Howell’s Riviera terrace set is dismantled to reveal an aquarium-and-chrome themed pad complete with a humongous three-tiered fish tank) in the wave of their lust. When they come up for air, some of the issues that drove them apart –like a tendency toward arguments and violence-- surface with them. They decide the only thing that will serve as a lifeline for the relationship is a “stop” word that each can use when they feel an argument is getting out of hand. Once uttered, the couple falls into two minutes of silence.

Meanwhile, Sybil and Victor track the couple down and show up in the middle of a knock-down-drag-out fight between Elyot and Amanda that makes us really fear, at the very least, for the safety of the fish in that tank. The next morning, the maid, Louise (Caroline Lena Olsson) hardly is nonplussed to find the apartment wrecked and Sybil and Victor asleep in the living room. Could this be normal?

The new spouses try to find out where they stand given that the relationship between Amanda and Elyot seems over. Not all might be what it seems, however, since what keeps two people together might not be obvious, even when the couple’s relationship is swimming around in a fishbowl for all to see. After all, they ask, what is “normal” in our private lives?
While some of the play defers to plot needs rather than reality, there is much humor, subtly executed by Day who brings guffaws with simple lines like “hush now.” He is brilliant as the calm, steady, stodgy guy who suddenly finds himself neither calm nor steady. Director Richard Eyre highlights the sexiness of Cattrall’s character, but makes sure she portrays someone different from Samantha Jones, the “Sex and the City” role for which she is known. Gross also is known to fans of TV’s “Due South” and “Slings and Arrows.”

Not amusing, however, is the physical abuse and casual acceptance by everyone that Elyot hits Amanda, or the spanking of Sybil by Victor. That unfortunately might have been considered appropriate in 1930 when the play was written, but it’s hard to understand why audiences today will think it funny to see women treated this way. Perhaps producers were willing to overlook this in the hopes that this Coward play would run similar to the recent success of his others on the Great White Way, like Present Laughter and Blithe Spirit.

Howell also doubles as costume designer creating beautiful period gowns and dresses for the women and dapper suits for the men. The three acts are presented with one intermission between the first two and a brief pause between the second and third. Running time is two hours and 50 minutes.

Christians might also like to know:
--Show lists a Mature Advisory
--God’s name taken in vain
--Adultery
Posted by LaurenYarger at 9:17 AM