Review: Reasons to Be Pretty 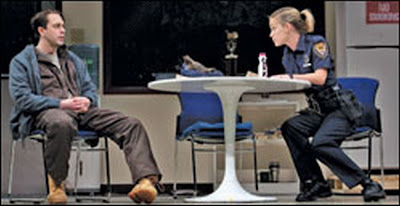 Terry Kinney directs sharp actors playing characters who aren’t exactly what they appear to be in this probing study of just how important physical looks are in relationships. Greg (Thomas Sadoski) is in the doghouse with girlfriend Steph (Marin Ireland) after he compares her to a pretty new girl at work. His remarks about her “regular” looks to co-worker Kent (Steven Pasquale) are repeated to Steph by her best friend, and Kent’s wife, Carly (Piper Perabo).

Greg tries to soothe Steph’s anger by suggesting that he meant it as a compliment, but Steph isn’t buying any of it. After hitting him a bunch and throwing some furniture (the apartment/work warehouse set is from David Gallo), she breaks off their relationship, deciding she deserves to be in a relationship with someone who finds her attractive. Kent and Greg continue their “guy talk” at the warehouse where they work, and Kent confides that he is having an affair with the pretty new woman and that his pregnant wife doesn’t suspect a thing.

LaBute’s seemingly stereotypical characters reveal veiled motives driven by a need to be liked. Kent and Carly are quite attractive. He is an insensitive sexist jock; she’s a typical blonde with low self esteem and intelligence to match. As they develop through tight and revealing dialogue, Kent turns out to be a bully and not quite the man he thinks he is while Carly is a lot smarter than we think.

Meanwhile Greg, who at first seems clueless as to why he blew it with Steph, comes around and realizes a little too late, what he had and lost. Steph, whose relentless hostility and unwillingness to forgive comes off anything but pretty, softens up with a new beau and colorful and feminine costumes from Sarah J. Holden, belying the fact that looks are more important to a relationship than she’d like to admit.

Kinney’s deft direction also helps propel the action and character development. As Greg won’t step up to the plate, either to help Kent hide his affair or to help him win the company softball championship, the director places the actors, literally, on opposite sides of a fence. In another snapshot, dejected Greg sucks on his drink straw while waiting for Steph with some flowers at a restaurant as “Take a Look at Me Now” plays in the background (Robert Milburn and Michael Bodeen, sound and music design). It’s priceless.

Posted by LaurenYarger at 2:23 PM