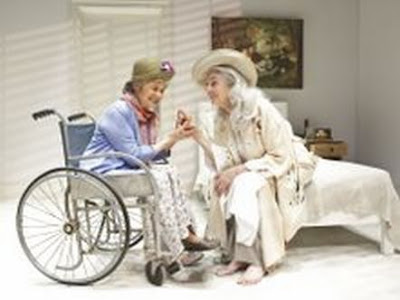 By Lauren Yarger
In a theater season offering a seemingly never-ending supply of plays mired in dark topics and dysfunction, what a delight Tina Howe’s Chasing Manet at Primary Stages is, especially since it fills us with hope, laughter and refreshes the spirit, even as the playwright examines the frustrations and indignities of growing old.

Jane Alexander stars as Catherine Sargent, the legally blind distant relative of painter John Singer Sargent, who passes her days at the Mount Airy Nursing Home lying in bed and repeating the mantra “out, I want out.” Her son Royal (Jack Gilpin) has relocated her away from familiar Boston so she can be nearer to him, but he rarely visits and when he does, relations are tense since Catherine finds fault with everything he does and says.

New roommate Rennie Waltzer (Lynn Cohen) suffers from memory loss, thinks her dead husband is visiting and has trouble getting around without a walker. She frustrates Catherine with her gleeful exuberance over the new accommodations she mistakes for a hotel with room service. Rennie’s family enjoys frequent visits from daughter Rita (Julie Halston), who doubles as an entertainingly wacky wheel-chair bound resident of the home) and other family members (the cast, all of whom play multiple roles, is rounded out by Vanessa Aspillaga, David Margulies and Rob Riley. They try to include Catherine in their good-natured visits, but she remains in bed facing the wall until someone misidentifies the Manet painting hanging above her bed as a Monet.

Suddenly Catherine is animated and sharing about her life as a renowned artist. This comes as a shock, not only to the Waltzers, but to the audience, because Alexander’s portrayal, under the direction of Michael Wilson, paints Catherine as someone who would be more comfortable hosting society galas on Beacon Hill, rather than modeling for and painting nudes like she tells us she once did. The revelation, though, gives insight into the now blind character, no longer able to see the work of art. This, combined with moaning patients and wheelchairs casting shadows as they hang from the ceiling (sets, lighting and sound with original music from by Tony Straiges, Howell Binkley and John Gromada) create an atmosphere that never lets the women break free of the old age and death surrounding them. Costume designer David C. Woolard even dresses stage crew in orderly garb so the mood is uninterrupted.

Catherine and Rennie soon hatch a plan to escape and take a voyage on the luxury ship QE II. Some humorous moments ensue as Rennie merrily divulges the plan to nursing home staff and her family, but they think it’s just the dementia talking. A bit where the two women joyfully pack their stool-softening pills is quite amusing.

Howe’s treatment of the women and how they cope with the inevitable is poignant, uplifting and gives us insight into the plight of the elderly. I came out of the theater wishing my grandmother were still here so I could give her a hug and tell her how much she meant to me.

Christians might also like to know:
• Language
• Lord’s Name Taken in Vain
• Woman in the painting is nude
Posted by LaurenYarger at 7:50 PM

I'm so glad you liked this, Lauren. Tina Howe's plays are such blessings -- full of delicious humor and life-affirming spirit. I recommend reading others, especially "The Art of Dining," "Painting Churches" and "Approaching Zanzibar."