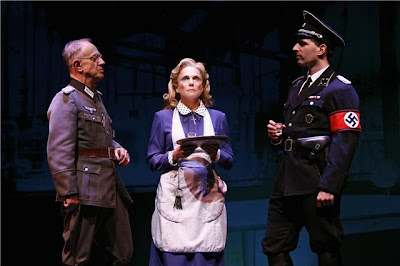 By Lauren Yarger
“What we do is who we are” and one woman’s vow to make a difference in the face of man’s inhumanity against man is the compelling plot of Dan Gordon’s play “Irena’s Vow” playing at the Walter Kerr Theater on Broadway.

Tovah Feldshuh, directed by Michael Parva, stars as Irena Gut Opdyke, a Polish Catholic who singlehandedly saved 12 Jews from death in the Nazi camps during World War II. In Gordon’s treatment of this true story, Irena, in her golden years, begins recounting her story to a group of school children. Times travels back to 1939 (accomplished through the use of costumes by Astrid Brucker, original music by Quentin Chaippetta and projections by Alex Koch amidst Kevin Judge’s set), where Feldshuh portrays the 18-year-old nursing student taken prisoner, raped by Russian soldiers and forced into labor in occupied Poland. Rumors soon abound that the Nazis are exterminating the Jews, and Irena is convinced after witnessing a mass murder, including the horrific killing of a baby in front of its mother. Unable to act or help, Irena vows never to stand by again.

A Nazi officer, Major Rugemer (Thomas Ryan) notices Irena and installs her as housekeeper in his home, where Irena hides 12 Jews in the basement. Three of them appear as characters in the drama: Lazar and Ida Hallar (Gene Silvers and Maja C. Wampuszyc, wonderfully moving in her Broadway debut) and Franka Silberman (Tracee Chimo). The group finds a hidden space that connects between the basement and the garden gazebo and stay hidden there even during dinner parties thrown for ranking Nazi officials like Sturmbannfuhrer Rokita (John Stanisci). To accomplish this, the Jews secretly help prepare the meals so extra help is not needed in the kitchen and Irena does some fancy juggling with the help of her friend Shultz (Steven Hauck) who, in a personification of the “don’t get involved” attitude, is willing to close a blind eye, but won’t take an active part to help the Jews.

Poignant moments about what it really means to be alive surface as the Jews struggle with having to “live like rats” and when Ida becomes pregnant. Gordon gives some terrific dialogue to Rokita who coldly and unaffectedly explains the systematic programming of the Jews for extinction. Where the script feels less realistic, however, are the frequent attempts at humor, often seeming out of place against the plot unfolding. 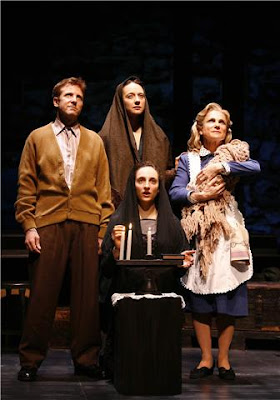 Gene Silvers as ‘Lazar Hallar,’ Maja Wampuszyc as ‘Ida Hallar,’
Tracee Chimo (kneeling) as ‘Fanka Silberman,’
and Tovah Feldshuh as ‘Irena .'
Irena’s hiding friends vote for safety and to abort the life of the Hallar child, whose cries would put them all in danger. Irena, opposed to abortion, fights for the child who eventually is born, a stunning testimony to life and hope amidst such evil and death.

Rugemer discovers the Jews in his house, but agrees to remain quiet when Irena becomes his mistress. The Poles despise her for becoming the mistress of a Nazi and danger mounts as officials receive reports that Jews are hiding in the house. Irena smuggles them out to the Allies who are invading as the war is drawing to a close. She then is interred as a collaborator since she had been the mistress of a Nazi officer. One of the Jews she hid frees her and she comes to the United States where she marries, has a daughter and “puts a do-not-disturb sign” on the memories of her past.

The circumstances of how she decides to tell her story and how she is reunited with loved ones is amazing and more than once brings a gasp from the audience as a full circle of forgiveness and faith’s ability to triumph over evil is revealed.
"God is always there," Irena tells us. Sometimes "we just need to listen a little harder."

An added bonus at the performance I attended was Irena’s real life daughter who appeared on stage to answer questions from the audience.

Posted by LaurenYarger at 10:25 AM

The standing ovation after the performance I saw was the longest I can remember on Broadway.

When Irena's daughter spoke afterward, she told how she had no clue about her mother's life during the war until they got a call from a student who thought Jewish people invented the Holocaust to gain sympathy. The student wanted to know what Irena thought. He found out.

The show ends with Irena pointing out to us "school children" that we are the last generation who will hear from people who actually lived through the Holocaust.