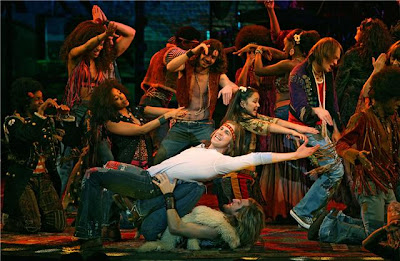 Gavin Creel as Claude (center) and the cast of the Broadway
revival of Hair. Joan Marcus photo.

By Lauren Yarger
The free-love, anti-war rock sensation Hair bursts onto stage at the Hirschfeld Theater for its first revival on Broadway since it shocked audiences in 1968, but its messages which rallied and spoke for a generation of flower-children hippies seems dated for the 21st century.

Last summer’s The Public Theater’s production in Central Park, which transferred for the Broadway run, was a timely revisit of the contra-culture classic with book and lyrics by Gerome Ragni and James Rado complementing Galt MacDermot’s score which gave us, among others, the now standard “Aquarius,” “Let the Sun Shine In” and “Good Morning Starshine.” Anti-war and anti-establishment sentiments were running high last summer as the presidential election race headed down the final stretch.

The election presumably solved that unrest, however: a liberal president was elected and quickly began championing that cause and reiterating his promise to end the war. So how does this musical speak for the current generation, as recent comments would have us believe? The anti-establishment protests we have now are in the form of tea parties being organized by conservatives, who, in general, and contrary to the anti-war protesters in Hair, are opposed to a quick pull-out from Iraq, and who are protesting bailout and stimulus spending without adequate representation of the taxpayers who will foot the bill. Not quite the same thing, so what might have struck a chord last summer seems out of tune now.

I wasn’t old enough to see the first Hair (really…I was playing with dolls, coloring in books and much too young to know a sexual and political revolution was taking place around me), but it must have been quite shocking. The depiction of sexual activity and drug use, not to mention the first-act, full cast, full nudity scene, took theater to a new unexplored level for back then. It was embraced as an expression of freedom by a generation which forced a wedge between themselves and their parents’ ideas of what was acceptable and expected forever.

For the most part, most of the folks I observed really getting into this revival were people old enough to be those flower children, perhaps reliving their youth. Others from younger generations around me were asking questions at intermission like, “Why did they have to be naked?” The sexual revolution the musical glorifies is intrinsically responsible for a decline in morals over the past 40 years that makes it almost impossible to shock an audience now. This year alone, I have seen more naked people on stage than I can count. 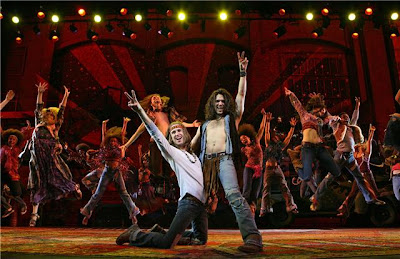 Gavin Creel as Claude and Will Swenson as Berger with the cast.
Instead of playing with dolls and coloring in books, elementary school children today have to worry about their families breaking up (maybe for the second or third time), how to avoid offending each other (opinions contrary to what's considered "politically correct" often are not permitted or tolerated) and how to avoid sexually transmitted diseases (with education required in some states as early as kindergarten). I don’t think any of this is good and that’s why it’s hard for me to embrace the message of this story. Watching a group of sexually promiscuous folks getting high on drugs and singing “our eyes are open” strikes me as ironic and sad.

Beyond my issues with messages that go beyond the basic tale of a boy trying to decide whether or not to burn his draft card, let me tell you that this revival is very well done. Diane Paulus directs an exuberant cast led by Gavin Creel, Sasha Allen (I saw understudy Saycon Sengbloh), Will Swenson and Caissie Levy who have strong voices and who throw their energy into the music and dancing (choreography by Karole Armitage). Paulus makes good use of the space, often having actors positioned in and interacting with the audience (even up in the balcony). The signature song “Hair” rocks out the house and is a showstopper.

Scott Pask’s scenic design includes a large sunburst painted on the brick wall behind the action and it, along with period costumes by Michael McDonald, set the stage.