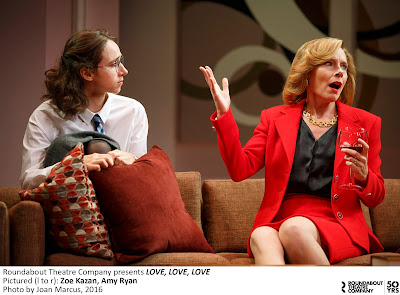 By Lauren Yarger
What's It All About?
Three looks at a family, beginning in 1967 during the height of Beatle mania when Kenneth (Richard Armitage "The Hobbit") and Sandra (Amy Ryan, who has multiple stage credits, but who is probably best know for TV's "The Office") meet. Sandra actually is with Kenneth's more conservative brother, Henry (Alex Hurt), but when Kenneth arrives, the chemistry can't be denied and the couple refuses to deny their need for each other -- which might actually bring a bigger high than the booze and drugs they like in the free-living culture they have embraced. Henry isn't happy, but is wise enough to realize that losing Sandra might be the best thing that ever happened to him.

In a second scene, we see the couple as unhappy parents of problematic teenagers Jamie (Ben Rosenfield) and Rose (Zoe Kazan).  Sandra and Kenneth can't seem to get their minds off of themselves and their own needs long enough to pay attention to their kids, even though they supposedly are celebrating Rose's 16th birthday. It seems that a new weed -- infidelity -- has has crept into the marriage as well, and has choked out the notion that  "love is all you need."

In the third vignette, the family is reunited for Henry's funeral. Poor Rose is blaming her unhappy life and her inability to make something of it on her parents. Jamie, meanwhile, has given up trying to make anything of himself and his father enables his pointless existence. It's an unhappy indictment on the values of the baby-boom generation and might have been more accurately titles "Selfish, Selfish, Selfish."

What Are the Highlights?
Strong performances, particularly from Ryan who manages to make a pretty unlikable person likable,

What Are the Lowlights?
It's kind of a bummer, even if there is truth in playwright Mike Bartlett's storytelling (it clocks in at just over two hours). The dark humor misfires because, unlike Bartlett's King Charles III, which poked fun at Britain's royal family, dysfunction in the typical American family strikes us as more tragic.