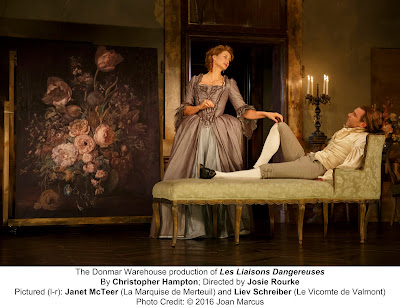 By Lauren Yarger
The Donmar Warehouse production of Les Liaisons Dangereuses takes the quote "revenge is a dish best served cold" quite literally, as any spark of heat or passion in this Broadway transfer seems to be missing.

Based on an 18th-century novel by Pierre Choderlos de Laclos, it's a tale of seduction and revenge (in a book by Christopher Hampton, who wrote the Oscar-winning screenplay adaptation). The Marquise de Merteuil (Janet McTeer) plots revenge on a former lover who jilted her by targeting his pure and convent-educated intended, Cecile de Volanges (Elena Kampouris). She enlists another former lover, Vicomte de Valmont (Liev Schreiber), to use some of his well-known seduction power on the girl and ruin her before the wedding night. Valmont has his own conquest in mind, however, the virtuous and happily married Madame de Tourvel (Birgitte Hjort Sørensen).

The couple pretends to help Cecile and her shy beau and music instructor Le Chevalier Danceny (Raffi Barsoumian), but it's really a game of betrayal that ensnares everyone in their circle, including Valmont's aunt, Madame de Rosemonde (Mary Beth Peil) and Cecile's mother, Madame de Volanges (Ora Jones).

"Love is something you use," the marquise says. "Not something you fall into."
McTeer holds our interest as the deceitful woman who is her own worst enemy and Kampouris is convincing as the virginal, yet sexually curious Cecile. Not much else compels us to remain engaged with the action, however.

This production from London's Donmar Warehouse is directed by its Artistic Director Josie Rourke, who fails to ignite chemistry between any of the characters, particularly McTeer and Schreiber. While I am not advocating for pornography on the stage, most of the sexual encounters seem stiff and passionless. Schreiber spends a lot of time putting his hand up the pretty, voluminous skirts (designed by Tom Scutt), but doesn't convince us that the women would overly welcome the act.

Meanwhile, the sets, also designed by Scutt, are puzzling. There is a drawing room with high ceilings, numerous crystal chandeliers (lighting design by Mark Henderson) and large family portraits -- but the pictures are askew, strewn about the room, or missing from their frames. The plaster of the walls is cracked and the edges of the room seem frayed. Is this to depict the decaying souls of the persons who live within the walls? Perhaps, but it mostly makes us wonder how people so wealthy could let the house go to pot like that, especially since they have servants. Rounding out the cast are Katrina Cunningham as Émilie, Josh Salt as Azolan, Joy Franz as Victoire, David Patterson as Major-domo, Laura Sudduth as Julie.

Scene changes are made with some classical music with vocals (Michael Bruce composes and supervises the music and sound design is by Carolyn Downing), but everything has a mechanical feel -- even a duel with swords (Lorin Latarro, directs movement) -- and the two hours and 45 minutes feel very long and unsatisfying for a play that's supposed to be all about passion and fulfillment....
Les Liaisons Dangereuses plays a limited engagement through Jan. 22 at the Booth Theatre, 222 West 45th St., NYC. Performances are Monday and Thursday at 7 pm; Wednesday, Friday and Saturday at 8 pm; Wednesday and Saturday at 2 pm; Sunday at 3 pm. Tickets are $42- $159: liaisonsbroadway.com/212-239-6200.

Posted by LaurenYarger at 2:50 PM