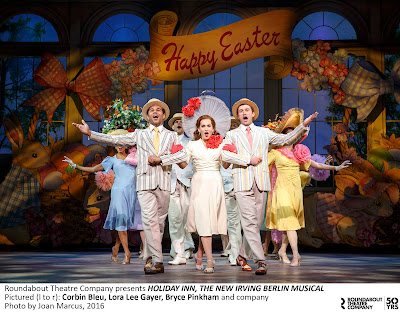 By Lauren Yarger
What's It All About?
It's a feel-good holiday musical inspired by the Academy Award-winning film "Holiday Inn" and features more than 20 Irving Berlin songs including “Blue Skies,” “Steppin’ Out With My Baby,” “Shaking the Blues Away,” “Easter Parade,” “Happy Holiday” and “Heatwave.”

Bryce Pinkham stars as Jim Hardy who wants to give up a life in the theater to settle down on a farm in Midville, CT. He casts showbiz partner Lila Dixon (Megan Sikora) as his wife, but she asks him to wait until she finishes the next performance tour with Ted Hanover (Corbin Bleu).

As you might expect, Lila doesn't return, so Jim finds himself alone on the farm. Well, not exactly alone. Showing up on his doorstep is Linda Mason (Lora Lee Gayer), former owner of the farm before it went into foreclosure, and its former caretaker, Louise (Megan Lawrence -- I saw excellent understudy Jennifer Foote) who soon convince him to turn the farm into an inn which specializes in shows on the holidays when Jim's entertainment friends are off and can help out. Romantic chaos ensues when Lila and Ted end up back in the scene and Ted thinks Linda is the perfect dance partner and wants to give her a shot at her dream of being a star in the new movie he is shooting out in California.

What Are the Highlights?
A good old-fashioned musical with great songs, a wholesome plot, sparkling costumes  (Alejo Vietti, design) and showstopping choreography by Denis Jones who has folks tapping and jumping rope -- and yeah, the firecracker dance made famous by Fred Astaire is in there, though Bleu seems a bit miscast in the role. Understudy Jennifer Foote was a pleasant surprise as the feisty and funny Louise and if I were keeping score, she might have come away with the best performance of the day.

Set Designer Anna Louizos takes us on a fantasy trip that starts with Victorian housing around the proscenium and provides delightful settings and holiday-themed backdrops.

What Are the Lowlights?
The chorus,  (under the Musical Direction of Andy Einhorn), isn't together at times and there are some flat notes.

There's nowhere to get up and dance to the great Berlin tunes. The grey-haired crowd at the matinee's could be part of the action at the inn reliving memories of dancing to the music played by an orchestra in boxes at either side of the house.

This show originally was developed at The Goodspeed Opera House in Connecticut.

FAMILY-FRIENDLY FACTORS:
-- No content notes. This is the one to see with the entire family while you are in for holiday fun in the city this Thanksgiving and Christmas.

Posted by LaurenYarger at 8:10 PM