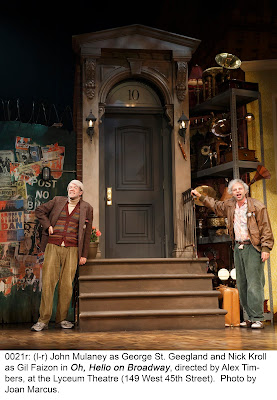 By Lauren Yarger
What's It All About?
Not really sure. Kroll and Mulaney portray 70-year-old New Yorkers Gil Faizon and George St. Geegland, roles they have played on comedy stages around the city and in a Comedy Central special. If you are part of their cult following, you probably will love it. If you never have heard of them before (yes, I have to admit I fall into that category), you probably will be feeling like you're not a part of the in crowd and aren't quite sure what the punch line is. It's not bad, but the thought I had through most of this one-hour, 40 minute show (with no intermission) was "what in the world am I going to say about this?" So I did a little research and here is the gist of what they say the show is about on an appearance with Jimmy Fallon: these two guys have written a play about how they have lost their rent-controlled apartment.  "It's kind of hard to explain," Mulaney said. Yeah.

What Are the Highlights?
There were some funny lines that I did get. There were a bunch of lines that were funny, but I am not sure why. There are a lot of inside theater jokes which are fun. A celebrity person is brought out of the audiences for some interaction.

What Are the Lowlights?
It's kind of vulgar at times. Some Jewish people told me they though the dialogue was anti-Semitic. It seems a waste of Director Alex Timbers's talent.

Posted by LaurenYarger at 6:35 PM