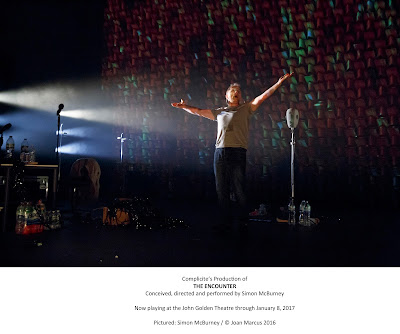 Take a Trip in Your Head to the Amazon

The sounds of the Brazilian rain forest surround you as technology brings to the stage a tale from a time and place that would seem as lost to modern times as it does from the photographer who finds himself trying to communicate during The Encounter with a lost Amazon village.

The year is 1969 and National Geographic photographer Lorem McIntyre (Simon McBurney, who conceived of the play inspired  by the book "Amazon Beaming" by Petru Popescu and who also co-directs with Kirsty Housley) arrives in Brazil's Javari Valley to photograph the indigenous Mayoruna at the mouth of the Amazon River.

During his encounter, which takes place over an undetermined time. McIntyre appears to hallucinate -- perhaps because of magic spells, drugs or a fever -- and is able to communicate with the chief, whom he nicknames Barnacle because of his many warts) by a form of telepathy called beaming.

The one-man show at first has the feel of a radio play with McBurney sitting at a table on a stage backdropped with a grey houndstooth pattern (design by Michael Levine ) on which projections (Will Duke, design) change the mood or make it look like rain (lighting design by Paul Anderson). What makes this production unique is the use of audience headsets throughout.

The headsets (Gareth Fry and Pete Malkin, sound design) are required to hear what is taking place beyond watching McBurney move around a bit on stage. Multiple characters are recorded and interact with the actor from tribes people to his young daughter who wants a story before going to bed. Sounds of the plane dropping off McIntyre, the Amazon and nature all can be heard.

The effect is the creation of an interactive and different experience for a Broadway stage. A side effect, however, is the tendency to want to nod off. Something about being cocooned in the headset environment along with a plot that isn't overly exciting had me fighting off sleep for most of the presentation.

About 30 minutes of the one-hour, 45-minute play could probably be cut. Perhaps then it would hold attention more. As it is, it certainly is a unique experience in storytelling. For those who enjoy interactive experiences, this probably is for you. The surround-sound type of effects make it sound as through a mosquito has just landed on your ear or that the person in the row behind you is whispering to you. As someone who doesn't particularly enjoy plugging in to electronic devices for entertainment, I'd rather use my eyes than my ears and see the Amazon come to life on stage.

The show has played to critical success in London, where McBurney is co-founder and artistic director of Complicite, one of Britain's most innovative theater companies. Mnemonic,  All My Sons and The Chairs have had New York runs.

The Encounter meets a wired audience through Jan. 8 at the John Golden Theatre, 252 West 45th St., NYC. Performances are Tuesday, Thursday at 7 pm; Wednesday, Friday, Saturday at 8 pm; Tuesday and Saturday at 2 pm; Sunday at 3 pm. Tickets are $65.00 - $145. theencounterbroadway.com

Posted by LaurenYarger at 12:42 PM