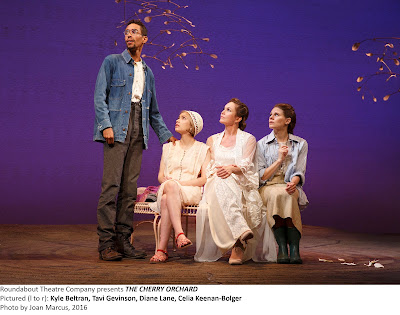 The Cherry Orchard
By Anton Chekhov
in a new version by Stephen Karam
Directed by Simon Godwin
Roundabout Theatre Company
through Dec. 4

By Lauren Yarger
What's It All About?
It's Chekhov's masterpiece about a family on the edge of ruin on the eve of the Russian revolution. The family's home and their precious cherry orchard are about to be sold to pay their debts. That's the official description, but full disclosure: I am not a fan of Chekhov. I know, I am a theater critic, I am supposed to think he is brilliant, but let's just say that the only Chekhov I ever have enjoyed is Vanya, Sonia, Masha and Spike by Christopher Durang, so you can take everything I say here with a grain of salt. Two things this Roundabout production had going for it were a new version by Stephen Karam, whose own play, the Tony-Award-winning The Humans is far better than anything Chekhov ever wrote, and this production's stars: Diane Lane, John Glover and Joel Grey. It's always worth seeing them in action.

What Are the Highlights?
Joel Grey is amusing as Firs, the family servant (though he sometimes is hard to hear -- sound design by Christopher Cronin). So is Tina Benko, who plays Charlotta, a governess who entertains a romantic future with him.

What Are the Lowlights?
OK. besides the fact that this is Chekhov? (Remember, grain of salt...)
This version didn't seem any more interesting than the original to me. If you don't already know the plot, it is a bit difficult to follow. Lane seems lost up on the stage as characters seem to be wandering around at times without direction from Simon Godwin. Three musicians join the production, sometimes at the front left side of the house, sometimes on stage. Mostly they are a distraction because of the music they play and their noticeable exits and entrances. At intermission during the two-hour, 30 minute show, one person was asking what the constant alarm sound had been -- she was referring to individual odd sounding notes being being played (Nico Muhly composes the music).

There also is a modern edge to the set (designed by Scott Pask) and costumes (designed by Michael Krass), the meaning of which is lost. The cherry orchard is presented as bunches of some modern-looking branches with leaves that overhang (and note to designers, just once, if I have to see The Cherry Orchard so often, I would like to see an actual cherry orchard somewhere on stage. Just once. But it would be perfectly fine with me if no more theaters felt they needed to produce something by Chekhov on their stages. May I suggest The Humans, or Vanya, Sonya, Masha and Spike instead. Please?

Posted by LaurenYarger at 1:42 PM