Broadway Theater Review: The Cripple of Inishmaan with Daniel Radcliffe 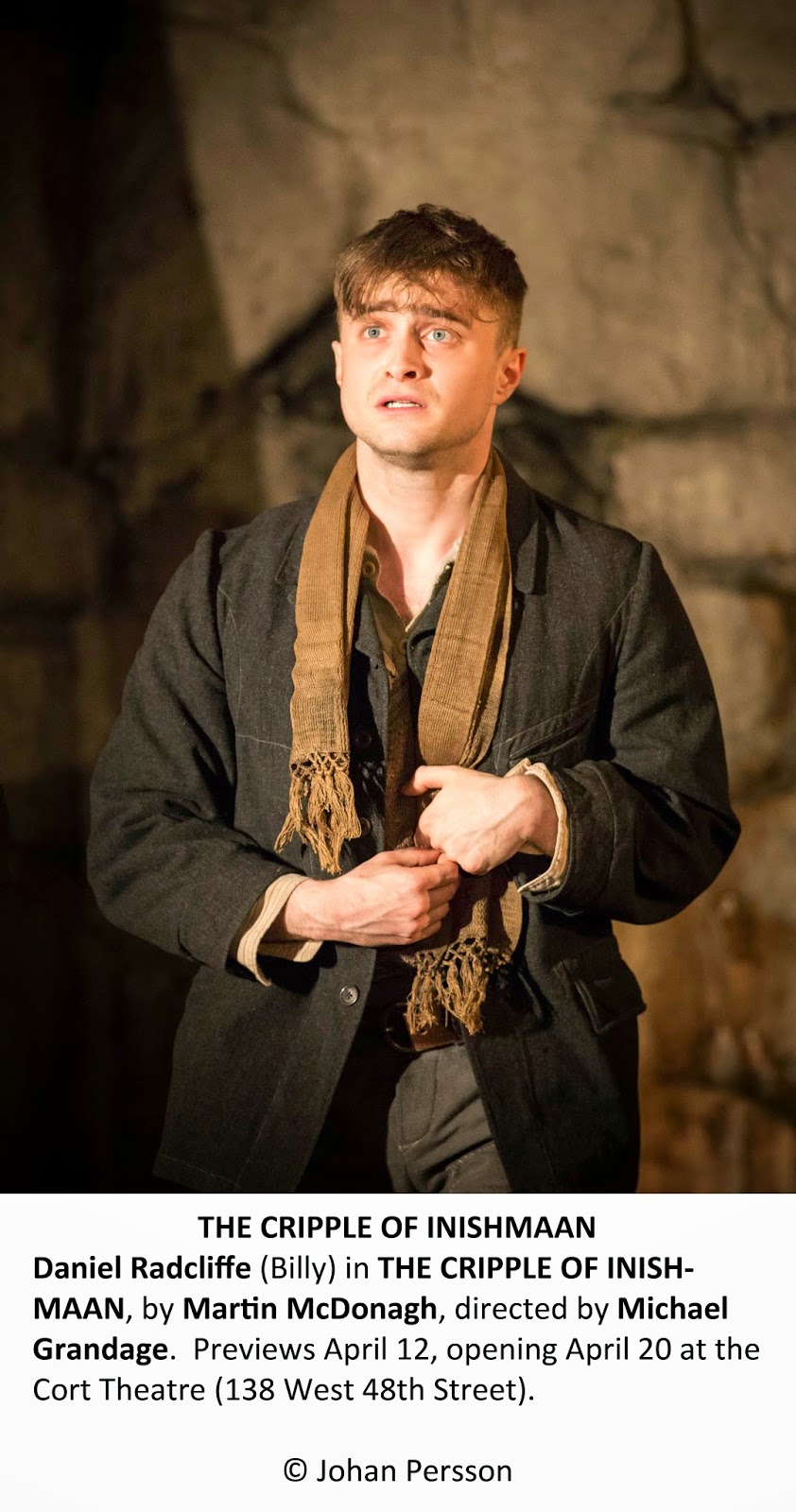 An Irish Tale Full of Lore and Longing
By Lauren Yarger
A bucolic Irish landscape stretches across the stage at the Broadway premiere of Martin McDonagh's The Cripple of Inishmaan, but a swirl of clouds clue us in that not all on this coastal island is as peaceful as it seems.

"Harry Potter" film star Daniel Radcliffe (How to Succeed in Business Without Really Trying; Equus) returns to Broadway to play Billy, the cripple in the play's title, who dreams of a different life from the one he has know with two spinster "aunts" who took him in as an infant orphan despite deformities to an arm and leg.

Eileen and Kate Osbourne (Gillian Hanna and Ingrid Graigie, who are excellent) love Billy, but fret about everything as they tend to the their little grocery market where absolutely nothing happens. Oh, Helen McCormick (Sarah Greene) might stop by with some eggs, if she hasn't already thrown them at someone or crushed them over the head of her brother, Bartley (Conor MacNeill) before she gets there. Or local newsgatherer/gossip Johnnypateenmike (Pat Shortt) might stop by with the latest tidbits about someone's goose biting a cat or a sheep's being born without ears.

But nothing much ever happens, especially for Billy, who spends a lot of time watching cows -- and secretly loving Helen. The reality is, however, that she -- and any other woman in the village -- would only laugh at the thought of being with someone like him.

One day, Johnny has some very exciting new, however. An American film crew is nearby shooting and is looking for locals to star in a movie. It's a ticket out of Inishmaan to Hollywood! Helen is sure her looks will get her a part, so she bribes Babbybobby (Padraic Delaney) to use his rowboat to get her and her brother to the filming location. Billy convinces Babbybobby to take him along too.

The performances, as directed by Michael Grandage, are superb and the storytelling, played out against a tri-fold set that rotates (design by Christopher Oram, who also designs the 1934-era costumes) is absorbing. McDonagh's script contains a lot of humor (sometimes very dark, though Cripple is less outlandish than some of McDonagh's other works like A Behanding in Spokane, or The Lieutenant of Inishmore, for example. This is more like his Beauty Queen of Leenane.)

Some "outside of reality" moments can be confusing, as is some of the plot. We're never really sure why Billy loves Helen. She's cruel, not only to Billy, but to anyone who has the misfortune to cross her path. In some ways, she is as much of an emotional cripple (there's allusion to priests and others taking advantage) as he is physically, so perhaps he recognizes a soul mate in that?

The performances are excellent across the boards. June Watson is a hoot as Johnny's acerbic, alcoholic mother. (Gary Lilburn completes the cast as the village doctor).

Radcliffe is a hard worker and proves here that he's just not a big name being used to sell tickets (missing the night I attended were the teenage girls who appeared en mass for How to Succeed and Equus). He gives us a layered Billy with the focus on the character, not on the star.  He's funny, sad and evokes sympathy. Hanna and Craigie (who played this role a couple of years ago in New Haven) are sensational. Their droll back-and-forths are the perfection of comedic timing. Just a look speaks volumes.

The Cripple of Inishmaan runs through July 20 at the Cort Theatre, 138 West 48th St., NYC. http://www.crippleofinishmaan.com/

Note: Ladies, the line for the restroom at intermission will be impossible. Plan accordingly.
Posted by LaurenYarger at 12:38 PM