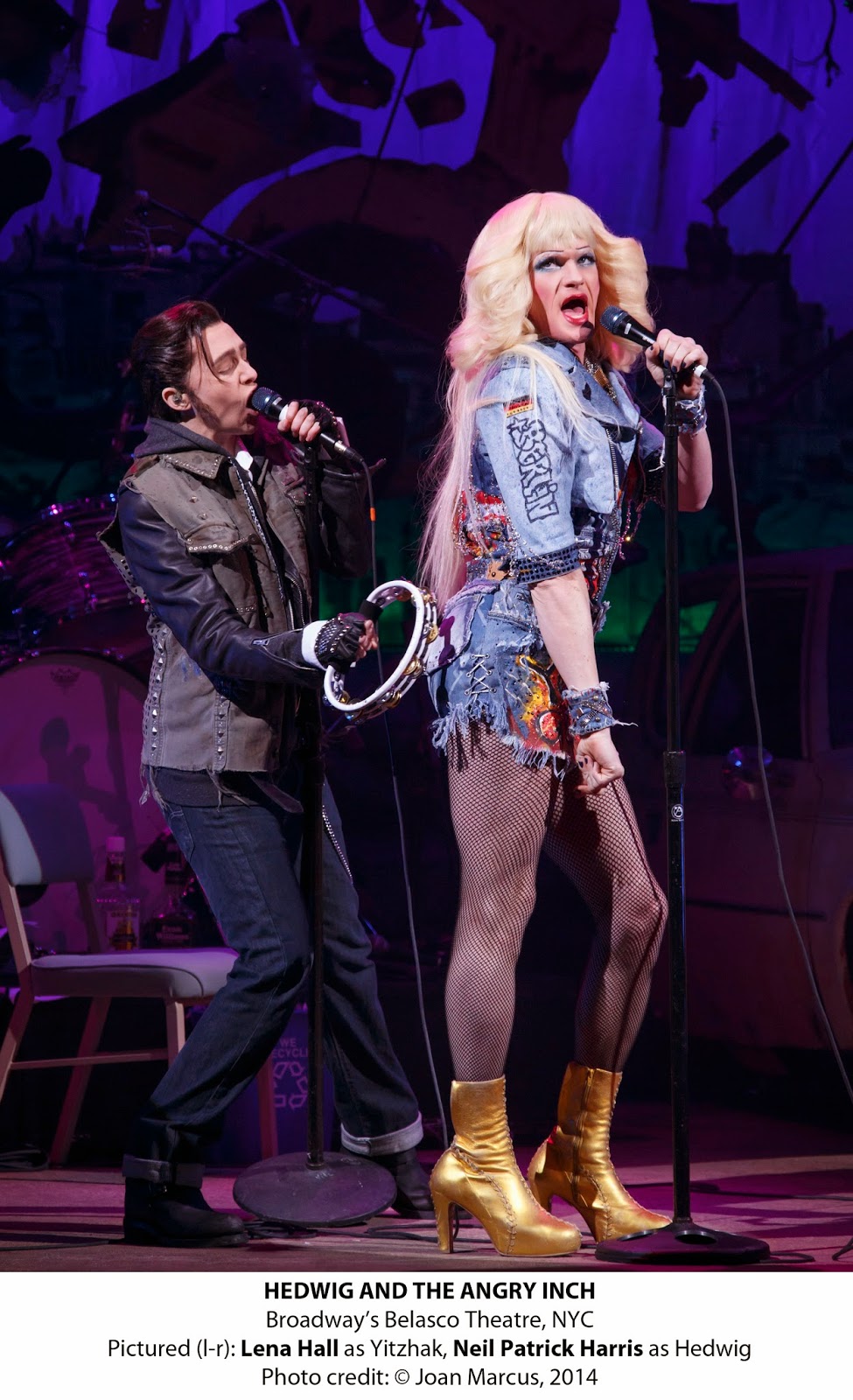 Performances, Music and Production Excel, but Message Falls Short
By Lauren Yarger
Hedwig and the Angry Inch, a cult film by John Cameron Mitchell rocks 'em out at the Belasco Theatre with Neil Patrick Harris in the starring role. His performance, and that of co-star Lena Hall are really good, the music by Stephen Trask is really good and the special-effect projections (designed by Benjamin Pearcy for 59 Productions) are really, really good. The story, however, not so much.

Hedwig tells us his sad tale. As a boy named Hansel, living in pre-wall Berlin,he is with his really cruel mother by his sexually abusive father, and attracts the attention of a guy named Luther who appreciates Hansel's more feminine side. He likes it so much that he insists the boy have surgery to make him a woman before accompanying his love to the United States. His mother thinks that's a splendid idea. The surgery leaves Hansel with an inch of his manhood and a scar that makes it look very angry and a new name: Hedwig.

Later, Luther abandons him and a devastated Hedwig forms a rock band called The Angry Inch (Music Director Justin Craig, Matt Duncan, Tim Mislock and Peter Yanowitz).They play Trask's really wonderful '80s rock tunes and it's a wonder the stained glass in the beautiful Belasco doesn't shake loose, though there are a couple of ballads as well. For one number the audience is invited to sing along with the bouncing balls. No, that is not a typo. It's a plural noun and yes, we see a part of the male anatomy bouncing along to lyrics projected on stage..

Meanwhile, Hedwig falls in love with a young musician named Tommy Speck (not played by an actor), whom he believes is the other half of himself, for whom he has been searching. This search began when his "not-going-to-win-mom-of-the-year" mother sang him a bedtime story based on Aristophanes' speech in Plato's "Symposium." It's all about the origin of love and how people started out as three types of fused couples whom angry gods separated. Now they must search for each other.... The staging of this song is amazing (Michael Mayer directs and musical staging is by Spencer Liff).

Tommy is angry to discover Hedwig's inch, however, and they split with Tommy stealing Hedwig's songs and going off to his own fame and fortune. Hedwig eventually ends up with husband Yitzhak (Hall). And in an ending that is supposed to be about finding your true self, I think, male and female genders are blurred even more.

This musical reminded me of the Broadway revival of Hair and Duncan Sheik's Spring Awakening (which also was directed by Mayer). My thoughts: "Great music, great performances, great staging, but I just wasted two-plus hours of my life watching a story that I can't get behind."

I get Hair and Spring Awakening -- just don't like the messages. Hedwig was plain confusing to me a number of times. I gather, after talking with some fans of the film, that changes have been made to the stage version and this led to more confusion as they tried to answer my questions.

Even if I'd followed the plot perfectly, I probably still wouldn't be a fan. Watching Neil Patrick Harris wear fishnet stockings and heels (and at one point only black leatherish briefs) and a ridiculous blonde wig (Arianne Phillips; Mike Potter design) while licking a guitar, licking Lena Hall, licking the stage floor -- well, using that tongue a lot including posing for the Playbill cover that features it -- just isn't my cup of tea. Give me American Idiot (also directed by Mayer) instead. Great rock music, great performances, great staging -- and a poignant story with a great message.