Theater Review: Women on the Verge 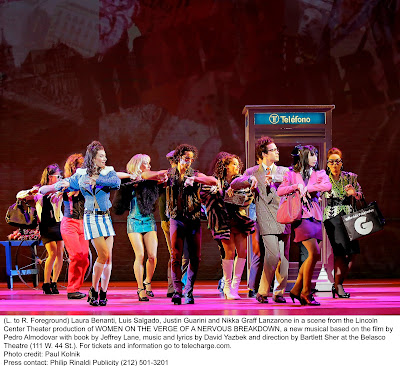 Even Stars like Patti LuPone, Sherie Rene Scott, Laura Benanti and Brian Stokes Mitchell Can't Keep This Show from a Complete Breakdown
By Lauren Yarger
It had such great potential: four of the most popular and talented stars of the Broadway stage, music and lyrics by the composer who gave us fun shows like The Full Monty and Dirty Rotten Scoundrels and a fabulous creative team led by award winning director Bartlett Sher (who helmed the wonderful revival of South Pacific) all under the auspices of Lincoln Center Theater.

But just like last year’s disappointing The Addams Family proved that having star names on the marquee doesn’t guarantee a good show, Women on the Verge of a Nervous Breakdown is more evidence that nothing is a sure thing.

This musical, playing the beautiful Belasco Theatre, fails on so many levels it almost defies explanation. Very little works well in this stage rendition of Pedro Salmodovar’s film about the relationships of women in 1987 Madrid. The production has the feel of an early concept rehearsal instead of a polished Broadway musical. The opening number fizzles and things don’t get better. Before it’s all over, the only thing really on the verge of a nervous breakdown is the audience.

Sherie Rene Scott plays Pepa, an actress and singer who gets dumped by her lover, Ivan (Brian Stokes Mitchell). She follows him, with the help of an ever-present taxi driver (Danny Burstein) to the apartment of a strange woman, who turns out to be Ivan's ex, Lucia (Patti LuPone), who is suing him for abandonment with the help of attorney Paulina (de' Adre Aziza). Lucia might just be abandoned again too if her timid son, Carlos (Justin Guarini), gets up the nerve to tell her he’s moving out to marry Marisa (Nikka Graff Lanzarone).

Thrown into the mix are 17 unmemorable songs with silly lyrics by David Yazbek, a few robotic steps of choreography by Christopher Gattelli and a book full of holes (characters appear on stage for exchanges of dialogue -- we have no idea who they are or why they are there) from Jeffrey Lane.

While you’re scratching your head, the action takes place an a set (Michael Yeargan, design) so full of fast moving parts and video projections (Sven Ortel) that you start to think a swig of the valium-laced gazpachos Pepa mixes wouldn’t be a bad idea, especially in the midst of motion sickness from the turning taxi which gives new meaning to the words “let’s go for a spin.”

The nausea intensifies with clashing colors used in the odd costumes designed by Catherine Zuber and soon the audience is on the verge of its own nervous breakdown. (I actually checked the program twice to be sure the unflattering and scanty clothes, heavy on the bras, were indeed the work of Zuber who usually has me wishing some of her creations were hanging in my closet.)

Why the gazpacho is drunk cold from cups that look like they are filled with a red substance, but which pour clear water, is just one of many puzzling questions, like
• Wouldn’t it have been a good idea to cast someone who actually is Hispanic or who can at least maintain a credible accent in one or more of these roles? Sometimes accents just disappear…
• Who was that scantily clad woman who just floated by in a window frame?
• Is the ventilation not working properly or was that pyro effect (Gregory Meeh, design) just a little too intense?
• Is she singing about being married for 20 years or has this song just been going on for 20 years?

But don’t take my word alone. Let the two-and-a-half-hour show speak for itself. In a song titled, ironically, “Tangled,” come the lyrics “You’ve been trying to follow the plot like there’s some twist you forgot … it’s like you’re losing your mind.” Another exchange of dialogue has one character saying, “What are you talking about?” to which another replies, “I have no idea, I’m just talking.”

Yup, those characters say it all, unfortunately.

I hate to be all negative, however, so here are some positive notes, because sometimes things just don’t work out the way you’d hoped and I love all of the people involved in this show and Lincoln Center:

• Benanti’s energetic and comedic performance gives the show most of its few laughs. She’s a champ and commands the stage.
• It’s a pleasure to hear the lovely voices of Benanti, LuPone and Thomas as well as Mitchell’s dreamy baritone, even if they aren’t singing great songs. Guarino, making his Broadway debut, does a nice turn as the wimpy Carlos who becomes attracted to the feisty Candela and lends his lovely tenor to nice harmonies with Scott and Benanti.
• Patti LuPone hops a motorcycle and her windblown wig (Charles LaPointe, design) is one of the highlights of the evening.
• The newly refurbished Belasco Theatre really is a Broadway treasure with its beautiful murals, paneling and stained glass enhanced ceiling. When you’re bored, just look up.