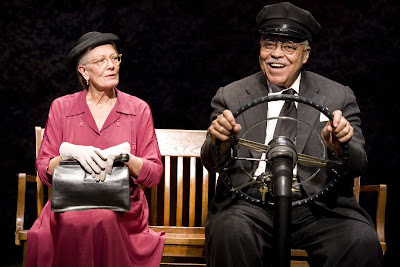 Vanessa Redgrave and James Earl Jones in the Broadway premiere of Alfred Uhry's Pulitzer Prize winning "Driving Miss Daisy", now in performances at The Golden Theater (252 W. 45th Street). © Annabel Clark
This Version Gets Steered on a Disappointing Detour
By Lauren Yarger
I always weep with emotion at Driving Miss Daisy, whether I’m reading Alfred Uhry’s wonderful Pultizer-Prize winning play, viewing the movie version (Urhy won the Oscar for his screenplay) or watching it on stage, but after attending the Broadway version, directed by David Esbjornson, I wept with disappointment.

Whether Esbjornson was just trying to do something so different from the norm or whether he couldn’t stand up to interpretations by his star-packed cast of Vanessa Redgrave, James Earl Jones and Boyd Gaines (they have seven Tony awards among them), I’m not sure, but Miss Daisy gets driven right off the road at the Golden Theater in a very disappointing detour that doesn’t do justice to this Rolls Royce of drama.

Jones is Hoke Colburn, who is hired by wealthy businessman Boolie Werthan (Gaines) to chauffeur his elderly mother, the indomitable Miss Daisy (Redgrave), after she no longer is able to drive herself. Daisy resists and at first, won’t give Hoke the time of day, but over time, the two learn to live with each other and eventually the black man and the Jewish woman forge a strong friendship. Uhry’s play is about the development of that friendship and about racial tension, not only between the characters, but in the United States during the Civil Rights Movement (the play is set in Georgia).

Granted, Esbjornson and the cast had their work cut out for them in recreating the piece, especially since most people have seen the Oscar-winning film starring Jessica Tandy, Morgan Freeman (reprising the role he originated Off-Broadway) and Dan Akroyd –all perfect—in the roles. Recreating it on stage in the wake of the film’s success is possible, even for those of us who love it, however, as long as the characters and layers of writing come through.

Ivoryton Playhouse in Connecticut, for example, just finished a very well done run of Daisy that left me as teary-eyed as ever. In this Broadway production, John Lee Beatty’s minimal set (the car is a bench and some chairs with a stand-alone steering wheel) is enhanced by Wendall K Harrington’s projections to provide visuals of locations. Between-scenes music by Marc Bennett is reminiscent of Hans Zimmer’s movie score. It’s a nice solution to competing with any thoughts of the film, but the rest of the production seems to veer off just for the sake of going in a different direction.

Jones’ Hoke is more self-assured than we’ve seen before, less fearful of speaking truth around the white folks. He makes it believable, though and he gives a nice new interpretation to some of Hoke’s lines and actions. Gaines, however, gives us none of Boolie’s depth. He’s perky, but doesn’t show the layers that normally give the character a full scope of appreciation for the complexities of Hoke and his mother as well as the ability to banter with them.

Redgrave fails to capture Daisy on any level and seems to just be reciting lines. There’s no bounce between her and Hoke. One of the play’s most telling moments -- when Daisy tells Hoke that he is her best friend -- sounds like a line being said as a page of script is turning instead of being the deep revelation it’s supposed to be. It’s not only a defining moment in the friendship, but helps conclude the play’s racial relations theme, and it’s completely lost here.

Then things get worse. Redgrave ages Daisy suddenly (though this should have been happening gradually throughout for all the characters and doesn't) and gums her final lines as though she’s forgotten to put in her dentures. The audience starts to giggle. When the play’s most dramatic moment comes (the pie scene, for aficionados), Jones plays it for a laugh – and gets it.
Imagine, if you will, the audience bursting out in laughter when Juliet stabs herself over Romeo’s body, or when Helen Keller says “wa wa,” or when Sydney Carton heads to the guillotine and you’ll have some understanding of how this detour of Daisy smacks head-on into a roadblock and finds itself at a dead end -- literally.

It’s really a shame. It’s such a great play. They’re all such great actors. It should have been a smooth ride, but instead, I felt like I’d been run over – by disappointment.