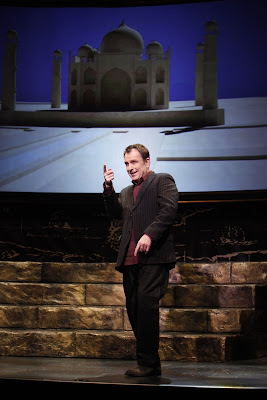 Colin Quinn. Photo by Carol Rosegg
An Abbreviated and Clever History of the World
By Lauren Yarger
Ancient looking steps lead to a modern video screen as past meets present and we find that one really isn’t all that different from the other in Saturday Night Live comedian Colin Quinn’s Broadway stand-up Long Story Short.

It’s the history of the world in less than an hour and a half with no nation or religion safe from the comedian’s storytelling which cleverly overlays history and modern culture. It's all very simple (and done respectfully, believe it or not). The Romans were the first mobsters, he asserts; the Middle East conflict, descended from the biblical story of Jacob and Esau, is about father issues, not land, he jokes, and in the 1700s, America was pursuing happiness while Russia was pursuing depression.

It all comes together in a witty presentation, directed by Jerry Seinfeld, that makes some very perceptive commentary of what we think is important and ultimately on the sinful nature of man.

Lots of language
Lord’s name taken in vain
A nude painting is shone on the screen
Posted by LaurenYarger at 11:05 PM