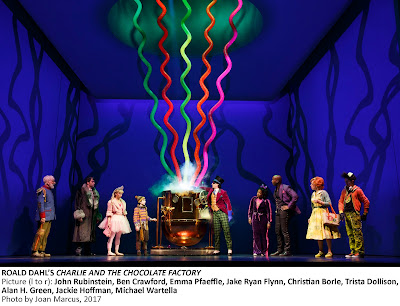 Charlie and the Chocolate Factory

By Lauren Yarger
You know how a chocolate candy can look tempting on the outside, but be a terrible disappointment when you bite into it? That morsel is Broadway's Charlie and the Chocolate Factory.

Anticipation was high before the show opened at the Lunt-Fontanne Theatre. After all, who doesn't love the story about little Charlie Bucket who finds a golden ticket inside his Willy Wonka candy bar that opens the doors to the amazing, cavernous chocolate factory and a chance to meet the eccentric, reclusive candy maker himself? Well, me -- I never did care for the book, so perhaps I didn't view the show with an open mind -- but everyone else I knew couldn't wait to see one of their favorite stories by Roald Dahl come to life and the West End London production had received positive reviews.

With Broadway funny man Christian Borle (Something Rotten, Peter and the Star Catcher) in the role of Willy Wonka and a score and lyrics by the Hairspray team of Marc Shaiman and Scott Wittman, well, as I said, the expectations were high for the Great White Way.

Sitting through this show, however, is a bit like ripping open a Wonka bar only to discover it doesn't contain a golden ticket. In fact, this show doesn't even have any chocolate bars for sale in the lobby or at the bar. How do you miss a marketing opportunity like that? Think of all the little kids attending who would have demanded a bar, especially if it might contain a golden ticket entitling the winner to a T-Shirt with the show's logo or something. But, I digress....

Borle does what he can with the material and is amusing at times. The score is not memorable, except, of course, for the Leslie Bricusse/Anthony Newley tune "The Candy Man" from the film version which is incorporated into the first pretty boring opening numbers. David Greig's book tries to update the original, but leaves us kind of confused at times an trying to remember if a plot point was in the book or not. Also failing to excite are the sets, designed by Marc Thompson, who also does the costumes. Some are virtually blank and ask us to use our imagination (the show's tag line is "Imagine," after all), but what works in a book doesn't work on stage. When watching a Broadway show with a cast of 35 performing Joshua Bergasse's choreography, it fair to assume that we should be seeing some amazing, larger-than-life scenery.

Basil Twist contributes some enjoyable puppet designs (the Oompa Loompas are a big hit) but some other effects fail like some giant squirrels doing ballet. Some special effects (design by Jeremy Chernick) go too far (I don't want to throw out any spoilers here, but the end of one of the kids with a winning ticket to visit the factory, is rather gruesome and brought gasps of alarm from the audience).

The kids making a visit to Willy Wonka's unimaginative factory are:
OK, as I was just typing up those descriptions I was thinking, "Gosh, I hate this story...."  There's an undercurrent of the adults not watching out for the kids that I don't like.There is a creepiness to Willy Wonka and an unpleasant, adult tone in a show that should be fun for kids.

Here's some more storyline that doesn't sit well:  Charlie's four elderly grandparents are too old to do much of anything but huddle together against the cold in a single bed in the shabby home kept by Charlie's mother (Emily Padgett) who works hard to keep a rotten meal on the table. She doesn't appear to be too upset by this and is quite perky and neat while singing bright tunes. It is as though Director Jack O'Brien threw up his hands and took a break with his Kit-Kat bar . Oh, wait, there aren't any candy bars in the theater, remember, so that couldn't be it.

Grandpa Joe (John Rubenstein), who accompanies Charlie on his tour of the factory, Grandpa George (Paul Slade Smith), Grandma Josephine (Kristy Cates) and Grandma Georgina (Madeline Doherty) have some of the funniest lines and are a highlight of the show.

Apparently I am not alone in my lackluster review. The show failed to receive one nomination for any of the major theater awards this season (Outer Critics, Drama Desk and Tony Awards). A national tour has been announced, however.

Charlie and the Chocolate Factory offers a sweet and sour snack at the Lunt Fontaine, 205 West 46th St., NYC. www.charlieonbroadway.com

FAMILY-FRIENDLY FACTORS
-- I would recommend this for 13 and up.
-- God's name taken in vain