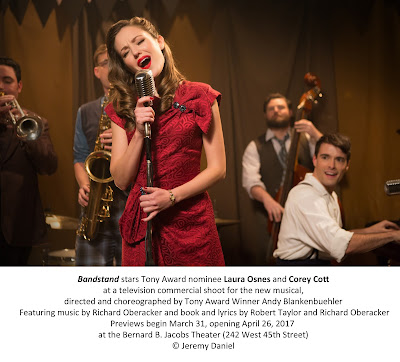 By Lauren Yarger
What's It All About?
A new musical by Richard Oberacker (Broadway debut) set in 1945.  Donny Novitski (Corey Cott). still haunted by his experiences in battle and the death of his best friend arrives in Cleveland to check up on his pal's widow, Julia Trojan (the beautifully voiced Laura Osnes). When a national radio contest is announced to find America's next big swing band, Donny decides to gather some vet buddies and enter the contest for a chance to go to New York.  Julia turns out to be the perfect lead singer. The band works through some corruption in the radio program business, but the past and some of the secrets it holds might be too much to overcome when Julia and and Donny discover a chance at love.

What Are the Lowlights?The score, while containing some interesting combinations of notes, seems to lose its way. The band's big song is called "Love Will Come and Find Me Again." a rambling title that telegraphs the cut and polish needed to make this musical shine.

The opening scene is quite dramatic, though confusing as Director/Choreographer Andy Blankenbueler (of Hamilton fame) has battle scenes taking place on a domestic set designed by David Korins while Julia does about her daily business at home. It's hard to know how the woman on stage is connected to the action. The story is rather predictable and with little tension, it fails to capture out attention.

Posted by LaurenYarger at 9:52 PM