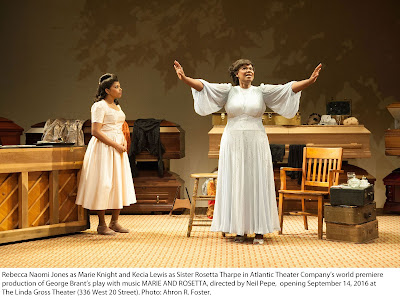 We join Rosetta and her protégée, Marie Knight (Rebecca Naomi Jones), as they reflect on how they met and teamed up to become one of the greatest duets in musical history. Tharpe, the queen of “race records” in the 1930s and ’40s, performed mornings at churches and evenings at the Cotton Club. Her less-conservative-seeming faith and coarse language are at first a challenge for Knight, who wonders whether Sister is “right with God.”

The two form a fast and fierce friendship, however, and realize that only divine blessing could make them sound as good as they do (the women sing and effectively appear to play the guitar and piano under the direction of Neil Pepe and the musical direction of Jason Michael Webb).

For Knight, plucked by the star from a backup group where she never had a chance to try out her voice, this is the start of a whole new career, even if it means leaving her children behind to hit the road. For Tharpe, the young singer’s high voice counters her own and the sound they make together could be her ticket back into the hearts of the gospel music crowd with whom she fell out by trying to interject rock and roll with the spiritual.

“You sing it for me,” Tharpe encourages as Knight is too timid to lend her voice to the jazzed up hymns, “and I’ll church it up for you,’ promising to curb her tendency to bend a lyric or two. When she uses a bad word, she’s quick to apologize to her companion -- and to God in a humorous ritual.

The women bond over having been married unsuccessfully to preachers and by a need to follow their music. That journey takes them to a number of places where singers of color might be accepted on stage, but often are not in restaurants or lodging houses. The meeting here takes place in a funeral home (with the action framed in coffins by Scenic Designer Riccardo Hernández) where they have been offered a place to lay their heads down to sleep, creepy as that thought might be.

Brandt is a gifted storyteller and the 90 minutes without intermission are mesmerizing. I had never heard of this duo by name, though I do know some of Tharpe’s music – “Down By the Riverside,” for example. We immediately feel like we want to know these women better. Brandt includes a satisfying twist in telling the story of how a woman who once was a big enough celebrity to fill a baseball stadium for her third wedding ended up forgotten and buried in an unmarked grave. I felt grateful that Brandt has brought her back to life for us.

That thanks includes powerhouse performances by Lewis (Mother Courage) Jones (Hedwig and the Angry Inch), even though Jones’ voice was sounding a bit strained. The music is heavenly. I felt as though I had attended a worship service.

The limited engagement at the Linda Gross Theater, 336 West 20th St., NYC, has been extended through Oct. 16, so see it while you can. Performances are Tuesdays at 7 pm; Wednesday through Saturday at 8 pm; Saturdays and Sundays at 2 pm. Tickets are $76.50: atlantictheater.org.

Posted by LaurenYarger at 11:58 AM