Update:
This play by J.T. Rogers has transferred to Broadway at the Vivian Beaumont Theater and has received Outer Critics and Drama Desk nominations.

Below is the review for the Off-Broadway production, also at Lincoln Center. The play seems at home in its larger space. It's still a bit too long in my opinion, but the ensemble is so good it's hard to lose interest. The topic is at once fascinating -- most everybody in the audience is unaware of these behind-the-scene negotiations that were the catalyst for the Oslo Peace Accords -- and relevant. In times when hatred makes it impossible to have civil discourse on just about any subject, the idea that people who have been enemies for thousands of years could sit down and talk as friends is refreshing.
-- Lauren Yarger 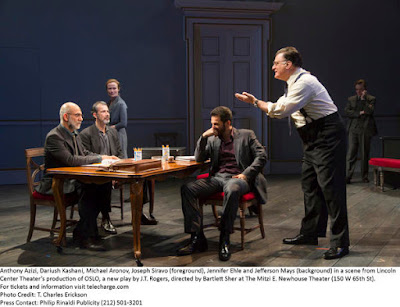 A Behind-the-Scenes Look at the Oslo Peace Accords
By Lauren Yarger
Don’t let what sounds like a boring premise – the 1993 Oslo Peace Accords – or the three-hour run time scare you away from Oslo the new J.T. Rogers play getting an Off-Broadway run at Lincoln Center.

Despite the fact that it could use a substantial edit (unless your name is Eugene O’Neill or Tracy Letts, your play doesn’t need three acts or two intermissions), this story of how the leaders of Israel and the Palestine Liberation Army ended up shaking hands on the White House lawn is engrossing and entertaining.

Bartlett Sher directs the large ensemble and keeps us from getting confused, even though there is some doubling in the mostly male cast. The truth is there was a huge cast of characters behind the scenes of the historic peace agreement and while President Bill Clinton probably enjoyed getting a lot of the credit, truth is the accords were thanks to a lot of secret meetings and negotiations headed up by a husband and wife in Oslo, Norway.

Mona Juul (an excellent Jennifer Ehle) is a well respected official in the Norwegian foreign ministry and reports to Jan Egland, the deputy foreign minister. She and her husband, Terje Rød-Larsen (Jefferson Mays), the director of Fafo Institute for the Applied Sciences, realize they might have come up with a way for the two sides to begin talks. It will be tricky – it is illegal for Israeli government officials to meet with members of the PLO and Foreign Minister Johan Jorgen Holst (T. Ryder Smith) is vehemently opposed to the idea. But if they can just find a way to get the right people together in an unofficial way, they might get the ball rolling….

Enter Ron Pundak (Daniel Jenkins), a junior economics professor at the University of Haifa who is able to make initial contact. The negotiations begin with some lower ranking officials at the Borregaard Estate outside of Oslo, where Mona and Terje acts as hosts and the housekeeper and cook (Henny Russell) keeps everyone happy with waffles (Rogers interlaces a lot of humor in the script to balance the complexity of the dialogue).

Soon, negotiations are going so well that the big players are brought in for both sides. Hassan Asfour (Dariush Kashani), the official PLO Liaison at the US talks which are going absolutely nowhere; Ahmed Qurie (Anthony Azizi), the PLO’s finance minister; Uri Savir (Michael Aronov), director general of the Foreign Ministry; Yossi Beilin (Adam Dannheisser), deputy foreign minister; and Shimon Peres, foreign minister, hash out the differences between their nations and the steps toward peace. All the negotiations take place behind closed doors, but they break, out in the parlor with Toril’s waffles, they become friends, sharing jokes and telling stories about their families.

Things get tense when Terje oversteps his authority and begins acting as a negotiator, making promises and telling lies to keep the negotiations moving forward, but which in reality, could bring the whole process to a grinding halt.

The action takes us through about nine months and to various locations, all on one set designed by Michael Yeargan with cushioned benches circling the stage area on the floor. An architectural embellishment over the door at the rear where the men venture for their discussions is a reminder of the grand house they are in and of the importance of the negotiations taking place. The parlor room becomes like a family room as the friendships develop even while personalities clash.

The three-hours certainly could be reduced – perhaps by about 45 minutes (especially if that second intermission could be eliminated). While this usually would signify a weak play to me, that is not the case here. All the action and information as written is interesting, well written and directed. There’s simply too much material and as a result people were nodding off and missing a pretty decent play. Take a nap first (or opt for a matinee instead of an 8 pm curtain time) and go. You’ll see the Oslo Accords in a whole new light.