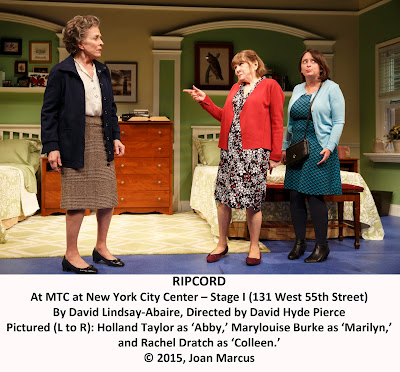 What's It All About?
Fabulous comedy/drama from Pulitzer-Prize winner Lindsay-Abaire (Rabbit Hole, Good People) about two women in the Bristol Place Assisted Living Facility. Abby Binder (Holland Taylor) has been enjoying a room all to her self for most of the years she has been at the facility, but recently Marilyn Dunne (Marylouise Burke) moved in and Abby wants her out. Bouncy, sunshiny Marilyn never stops talking, especially about her family and little grandson. Abby just wants to be left alone and in peace and implores home employee Scotty (Nate Miller), to pull some strings and get rid of her. The budding actor agrees -- if Abby will join Marilyn on a trip to a haunted house in which he is performing. As the roommates discover more about each other, Abby reveals that nothing frightens her while Marilyn apparently never gets angry. The women make a bet: if Abby can make Marilyn angry, she will get a single room again. If Marilyn can scare, Abby, however, she will stay and get Abby's bed with the view.

What ensues is hysterical hijinx as the women try to win the bet, with Marilyn involving her plucky daughter Colleen ("Saturday Night Live"'s Debbie Downer Rachel Dratch) and reluctant son-in-law Derek (Daoud Heidami). Also paying a visit is Abby's estranged son, Benjamin (Glenn Fitzgerald). Amidst the laughs, are some poignant human emotions -- Marilyn's marriage might not have been all that happy and Abby has reasons for building a wall of stone around her heart -- well acted by Holland and Burke who develop a splendid "Odd-Couple-esque"  relationship ably directed by David Hyde Pierce.

What Are the Highlights?
Great dialogue and non-stop laughs. At the end of the first act, everyone in the audience still was laughing, prompting each other to recall their favorite parts and laughing all over again. Many people voiced doubt that the second act could live up to the first and would be sure to disappoint, but I can tell you, they were pleasantly surprised and exclaiming, "That was awesome, when leaving the theater. I convey these comments so you will know I am not alone when I say that I haven't enjoyed a show this much in a long time.

The sets designed by Alexander Dodge lift the show to its full potential. They take us from the assisted living facility into the wild blue yonder and beyond.

The haunted house sequence left me in stitches, especially given how much I did not appreciate the Sleep No More experience at the McKittrick Hotel a few seasons ago....  Funniest baby-eating clown (also played by Fitzgerald) ever.

Again, in between the laugh lines is a nice story about family, friendship, forgiveness and fresh starts.

What Are the Lowlights?
The short run already is an an end.

Posted by LaurenYarger at 4:20 PM