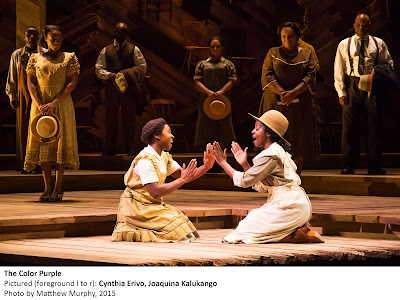 Color Purple Revival May Be Better Than the Original
By Lauren Yarger
Alice Walker’s moving and haunting novel “The Color Purple” comes to life in a fresh new way thanks to Director John Doyle’s vision for the revival currently running on Broadway.

Originally a best-selling novel by Alice Walker, then a motion picture (starring Oprah Winfrey and Whoopi Goldberg in memorable performances), The Color Purple got a musical stage adaption a little over 10 years ago, with a fine book by Marsha Norman and music and lyrics by Brenda Russell, Allee Willis, Stephen Bray. It was surprisingly good – one of those times a favorite book or movie actually made the transition to the stage. This revival, however, has been stripped back, tightened and made even more vibrant (Doyle also designs the set) in the telling of a young African-American woman who finds herself after enduring years of hardship and suffering.

One of the spotlights on why this version is so exciting is the knock-your-socks-off Broadway debut of its star, Cynthia Erivo.

Erivo, played the role of Celie in the Menier Chocolate Factory’s production of the show in 2013 and  commands the stage again here – despite playing some other powerhouse performances by Jennifer Hudson (Shug Avery) and Danielle Brooks (Sophia) – both of whom also are making their Broadway debuts in the production.

The story follows Celie from 1909 to 1949 in rural Georgia. Forced to give up children she conceives when her father, Pa (Kevyn Morrow) has his way with her, teen Celie’s only happiness comes from the love she shares with her sister, Nettie (Joaquina Kalukango). Pa marries Celie off to a mean, older man with a brood of children. She knows the man only as Mister (Isaiah Johnson) and if forced to put up with his unkempt house and children, his abuse – and his mistress, an entertainer named Shug Avery (Hudson).

But instead of hating each other, the women form a friendship and help each other cope. Meanwhile, Mister’s son Harpo (Kyle Scatliffe) marries an outspoken woman named Sophia (Danielle Brooks) who is not to be messed with -- Brooks' version of the song "Hell, No!" is a tour de force.

As the years go by, we see Celie develop and grow and eventually find a way out of her circumstances. Erivoa's rendition of "I'm Here" brought a standing ovation mid-show. Sophia, however, is defeated by a white dominated society making sure she is left with no hope or dignity -- well almost.

The triumph of the human spirit is palpable, solidified by soaring ballads and extraordinary performances. The faith of Celie and Nettie sees them through and the love they have for each other is a lifeline through years of separation.

If the original was good, this refined, re-envisioned version is even more exhilarating and rewarding. Look for Erivo to get a best actress nod (and Hudson and Brooks also might join her in the featured category.)

Posted by LaurenYarger at 4:03 PM