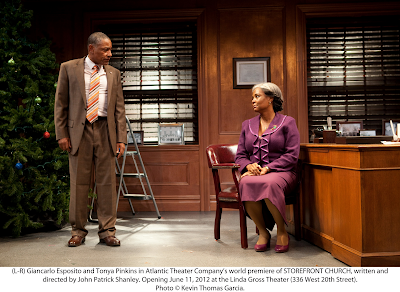 Storefront Church
Written and Directed By John Patrick Shanley
Atlantic Theater Company
What's it about?
Well, a little bit of a lot of things. Jessie Cortez (Tonya Pinkins) took a second mortgage on her home to finance the renovation of a storefront church downstairs. Pentecostal Pastor Chester Kimmich (Ron Cephas Jones) doesn't have much to show in the way of renovations, however, and has yet to hold a service. The bank moves to foreclose on the property and Jessie's husband, Ethan Glodklang (an engaging Bob Dishy) tries to get an extension from banker Reed Van Druyten (a riveting Zach Grenier) to no avail. Jessie reaches out to her friend's son, Bronx Borrough President Donaldo Calderon (Giancarlo Esposito), for help. He reluctantly agrees, then finds himself in the middle of a politically compromising position with Van Druyten's superior at the bank, Tom Raidenberg (Jamie Lynne Sullivan) and at conflict with his own thoughts about religion -- the son on of a preacher, he had walked away from it. Through a series of circumstances, all of the characters find themselves attending the inaugural service of The Divine Plan for Salvation Church.

What are the highlights?
Interesting diverse characters, each with emotional baggage that prove in the end that they all have more in common than they would have imagined. Dishy is a hoot delivering numerous "Jewish" jokes and Grenier gives a gripping performance of a man coping with physical and emotion scars. Shanley (Doubt) explores contemporary issues like the mortgage crisis along side ancient questions about faith. the Atlantic Theater's newly renovated space is in a former church, so  this productions feels right at home, especially when the cast sings a nice hymn.
What are the lowlights?
The script is rough and isn't always clear in direction. Male-heavy perspective. Having the characters attend the service is contrived. Pinkins is not convincing as the older Hispanic woman. It's a production that makes a good argument against writers directing their own work.