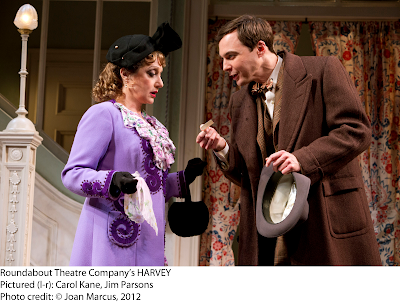 The Humor Prompting Large Bursts of Laughter Seems as Invisible as the Rabbit
By Lauren Yarger
Picture this: You are introduced to a man who promptly introduces you to his best friend, Harvey. There isn't anyone there, but you seem to be the only one in the room who can't see the six-foot-tall white rabbit with whom he's conversing, so you don't say anything while trying to decide whether he's nuts or you are. Welcome to the world of Mary Chase's Pulitzer-Prize-winning play Harvey, getting a Broadway production by Roundabout Theatre Company. Welcome also to my world as I puzzled over why the audience was responding with riotous laughter to lines that inspired only an appreciative smile from me.

Don't get me wrong. The play is not bad. In fact, it has an old-fashioned, gentle humor (that Pulitzer came in 1945, one year after which the play is set with period costumes here by designer Jane Greenwood). This production boasts some big Q factor talent too: Jim Parsons of "Big Bang Theory" fame as the rabbit-seeing Elwood P. Dowd; Jessica Hecht (A View from the Bridge and numerous TV roles); Carol Kane ("The Princess Bride," TV's "Taxi"); Larry Bryggman ("As the World Turns"); Rich Sommer ("Mad Men"); and Charles Kimbrough ("Murphy Brown").

I honestly just couldn't figure out how simple lines like "Why he's as outdated as a cast-iron deer" or saying that a gift bouquet of flowers had just been picked outside had people rolling in the aisles. One man regularly slapped his knee and guffawed. Another laughed so hard he snorted. Not just once, but  often. I had maybe cracked a smile. I kept feeling like I had a sign on my back that said, "Laugh at her. We're playing a joke."

At any rate, the audience very much enjoyed this tale of kind, polite, trusting Elwood who is very lovable. He just has a small problem: an invisible rabbit friend, who supposedly isn't so small -- he's 6 feet three and a half inches tall, according to Elwood. Harvey accompanies Elwood everywhere. much to the embarrassment of his society-conscious sister, Veta Simmons (Hecht), her daughter, Myrtle Mae (Tracee Chimo) and society matron Ethel Chauvenet (Angela Payton). Veta decides it's time to commit Elwood and takes him to Chumley's Rest, a sanitarium run by William R. Chumley (Kimbrough) and his wife, Betty (Kane). David Rockwell's sets rotate to take us quickly from the beautifully panelled library at the Dowd mansion in Denver to the reception room at the sanitarium.

Because some of the message here is "who's really is crazy?" a misundserstanding convinces the doctor in charge, Lyman Sanderson (Morgan Spector), his nurse, Ruth Kelly (Hollyey Fain) and the orderly, Duane Wilson (Sommer) that Veta is the one who needs a room at the home. Omar Gaffney (Bryggman), the judge backing Elwood's commitment clears things up, but soon Elwood is spending time at his favorite bar tossing them back with new friend Chumley and suddenly Harvey might not be so invisible after all. A plot to inject Elwood with a drug that will "cure him" by letting him see the world and all its reality begs the question, "just what is normal?"

“In this world, you must be oh so smart or oh so pleasant," Elwood tells us. "Well, for years I was smart. I recommend pleasant.”

Food for thought, but not necessarily the trigger for a sustained burst of laughter, you know what I mean?

Parsons does a nice job presenting the affable character (though it is hard not to think about Jimmy Stewart, for whom the cadence of Elwood's lines seems almost tailor-written, and who is most associated with the role). Director Scott Ellis fails to provide cohesion for all the performances, however, and the result is that everyone seems to be doing his or her own thing. While Sommer conveys his character's frustration, for example, it seems to be in a vacuum without any bounce off the other actors. Hecht shouts most of her lines in an indiscernible accent (which the characters brother and daughter oddly don't share) and Kane's role is regrettably too small to show off her comedic talent.

Christians might also like to know:
-- Language
-- It is mentioned that the rabbit might be a pooka, a goblin or spirit of Irish folklore that takes the form of a large animal.
Posted by LaurenYarger at 11:55 AM