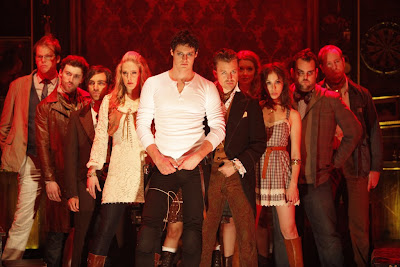 Bloody, Bloody Andrew Jackson cast. Photo by Joan Marcus
It's Emo-Cracy in Action
By Lauren Yarger
Backroom deals in Washington, slogans of “take the country back,” “teabags,” “change” and a celebrity US president who promises transparency, vows to reglulate bankers on Wall Street and makes unilateral decisions he “knows” the American people really want even when they say they don’t.

Headlines ripped out of today’s newspapers? No, they’re issues from nearly 200 year-ago life of the nation’s seventh president and parts of the script from Broadway’s musical Bloody Bloody Andrew Jackson.

In this tongue-in-cheek story by Alex Timbers, who directs, with emo-rock music by Michael Friedman (who also wrote the lyrics), Jackson (Benjamin Walker) is personified as a tight-jean-wearing rock star persona, whose tale is told with a lot of sarcasm and humor. It’s enjoyable and a subtle commentary on today’s politics, which haven’t changed all that much in the last two centuries, it would seem. It is especially funny on the eve of Tuesday’s election.

The savvy presentation with choreography by Danny Medford takes place on a stage decorated with an explosion of frontier-themed props, chandeliers and tiny lights that extend into the house. Everything glows a bloody red as the audience enters the theater (watch out for that floating horse carcass.) Modern/period costumes are designed by Emily Rebholz.

The “bloody” refers to Jackson’s obsession with ridding the nation of Indians (they killed his family). After one massacre, he sends a surviving infant home to his wife Rachel (Maria Elena Ramirez) as a “souvenir.” Black Fox (Bryce Pinkham), who survives as the leader of the last nation of Native Americans by cooperating with Jackson, helps raise the boy until his refusal to go along further with the relocation of his people breaks his friendship with Jackson.

There’s a lot of history thrown in with the gags, like Jackson’s initial failed bid for president against John Quincy Adams (a very funny Jeff Hiller), charges of bigamy -- Rachel apparently was legally married to someone else -- and the Louisiana Purchase. These are thrown in amidst some very funny interpretations of politicians of the time: James Monroe (Ben Steinfeld), Henry Clay (Pinkham), Martin Van Buren (Lucas Near-Verbrugghe) and John C. Calhoun (Darren Goldstein).

Rounding out the zaniness is Kristine Nielsen as the wheel-chair-bound Storyteller, the voice of history, who has a love-hate relationship with Jackson.

This fresh take on the “man who puts the man in manifest destiny” is a treat and makes the transition from last season’s Off-Broadway presentation to Broadway well (many of the cast members repeat their performances for this rendition).