Theater Review: The Merchant of Venice with Al Pacino 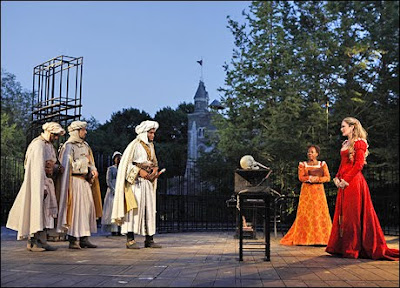 Luke Forbes, Dorien Makhloghi, Nyambi Nyambi, Marianne Jean-Baptiste
and Lily Rabe. Photo by Joan Marcus
A Strange Play, Done Well, but Falling Short of Raves for Pacino
By Lauren Yarger
The big name this year in the Public Theatre’s Shakespeare in the Park production of The Merchant of Venice is Al Pacino as Jewish moneylender Shylock.

He played the part to critical acclaim in the 2004 film and he is, after all, Al Pacino, so he gives a very good performance, despite an accent that fluctuates between a Jew and something else, but I’m not sure director Daniel Sullivan coaches more out of him than anyone else might have given to the part. I kept hearing raves, even as I avoided reading reviews before seeing the show. Everyone was talking about the performance, but after seeing it, I couldn’t help but think, “Raves? Really?” Respectable, sure, but I didn't see anything that made me say, "This is the best Shylock ever!"

Maybe it’s hard to know what to expect from such a strange character in such a strange play. Shylock agrees to lend money to his hated enemy, Antonio (Byron Jennings), who seeks the money for his friend, Bassanio (Hamish Linklater), so that he can marry the beautiful heiress Portia (Lily Rabe). In return, Antonio agrees to pay with a pound of flesh if he defaults on the loan.

Meanwhile, Portia, in love with Bassanio, has her own problems. Her father’s will states that she can only marry the man who selects correctly from three small caskets, gold, silver and lead. One contains Portia’s picture and the man who selects correctly wins the girl. Attempts by the Prince of Morocco (a very funny Nyambi Nyambi) and the Prince of Gobbo (Jesse Tyler Ferguson) are unsuccessful. The process is overseen by Portia’s servant, Narissa (Marianne Jean-Baptiste – here, in truth, is the standout performance of the night. She's fabulous.) When Bassanio chooses the right box, he and Portia are wed and so are Narissa and Bassanio’s friend, Gratiano (Jesse. L. Martin).

But not all is happy in Venice. Shylock’s daughter, Jessica (Heather Lind), converts to Christianity and elopes with Lorenzo (Bill Heck) with the help of some money she steals from her father. Meanwhile, Antonio’s assets, with which he was to repay the loan, are lost at sea. Refusing to show any mercy and relishing the thought of cutting out Antonio's heart, Shylock refuses offers of cash from others to repay the loan and demands his pound of flesh. Will the knife-sharpening madman get to take his just reward from the captive Antonio or will Narissa and Portia, disguised as men (so Shakespeare) save the day?

I’ll leave you to guess if you don’t already know, or to see the play, or at least to dust off your old volume of Shakespeare to find out, but with its near torture chamber scene, its anti-Semitic
themes and Shylock’s subsequent forced conversion to Christianity, this one from the bard is a little out there.

The production is very well done, though, admittedly, it’s hard not to like anything at the Delacorte Theater with all of Central Park as the backdrop. Mark Wendlend’s very slick, moving iron-gate set steals the show, though a strange-looking electric device in the torture scene is somewhat unclear in nature and looks more like a giant teapot at first. Jess Golstein’s costumes leave us wondering what time period we’re in: the men all wear suits with long morning coats and the women’s dresses suggest 19th century, though the original play is set in the 16th century, when the Inquisition and a forced baptism might be more at home.

A very satisfying production, a good, if not rave-generating performance from Pacino and a performance that deserve raves from Jean-Baptiste combine to make this time well spent (it’s three hours, so get a sitter for the little ones).

The Merchant of Venice is running through Aug. 1 in rep at the park with The Winter’s Tale. at the Delacorte Theatre, Central Park, near 81st Street. Tickets are free and are distributed to those waiting in line at the park or through a virtual line online. Visit http://www.publictheater.org/content/view/126/219/ for more information.

Christians might also like to know:
• The scene where Shylock prepares to take his pound of flesh is a little creepy. No additional notes.
Posted by LaurenYarger at 9:29 PM