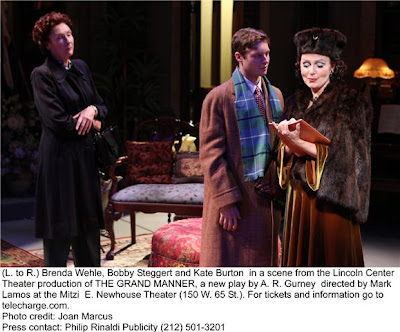 Nostalgic Piece is Sweet, but Not Necessarily Grand
By Lauren Yarger
A.R. Gurney’s nostalgic tribute to a real-life encounter he had backstage with Katharine Cornell, first lady of the theater, shortly after World War II as told in the world premiere of The Grand Manner, playing Off-Broadway at Lincoln Center, is sentimental and sweet, but doesn’t seem as grand as some of his other works, (Sylvia, Love Letters, The Cocktail Hour), so rich in humor, character development and snappy dialogue.

Instead, it plays out more like someone's very long story during which the mind wanders triggering guilt because it’s a worthy story, but since you don’t really know the folks involved it has a “you-had-to-be-there” feel to it that keeps you from fully appreciating it.

Wisely, the play is 90 minutes without an intermission and the performances, directed by Mark Lamos, are fine. Bobby Steggart (who stole scenes in Ragtime and Yank! last season) plays young Pete (Gurney), who travels from his New England boarding school to New York to interview Cornell (Kate Burton) for a school project. He gains backstage access thanks to a letter of introduction from his grandmother back in Buffalo, Cornell’s hometown. Brenda Wehle plays Cornell’s assistant, Gertrude Macy, and Boyd Gaines is Cornell’s husband/director Guthrie McClintic.

Some controversy ensues when Pete reveals that McClintic has cut some of Cornell’s seductive lines from Shakespeare's Antony and Cleopatra. He doesn’t think they suit her "grand manner" and Pete doesn’t help matters when he equates Cornell age-wise with his grandmother. Some of the characters' needs and secrets are revealed (none of which are surprises at all, especially one telegraphed by costuming designer Ann Houd-Ward) and Cornell inspires Pete to become a playwright.

It’s sweet, and John Gromad provides some nice original music and sound. John Arnone’s set is pretty grand for what I presume is a "grand manner" star's green room (the chaise needs some cleaning – it’s terribly stained) but the story doesn’t stay long with you once you have left the theater.

Christians might also like to know:
• Language
• God’s name taken in vain
• Sexual/homosexual dialogue
Posted by LaurenYarger at 2:53 PM