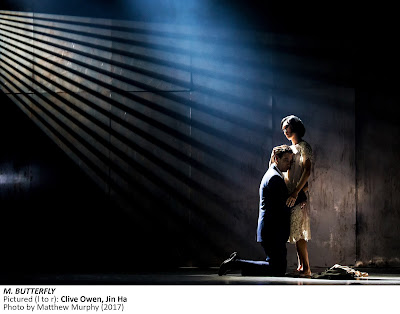 By Lauren Yarger
In the opening scene of David Henry Hwang's updated M Butterfly, getting a Broadway revival directed by Julie Taymor, mocking contemporaries of Rene Gallimard (Clive Owens) ask, "How could he not know?"

The question at hand is how Gallimard, an attaché to the French embassy in China, did not know that the Peking Opera actress with whom he had been having an affair for 20 years was, in fact, a man.

Good question, and in spite of rather graphic details about how Gallimand mistook his sexual relations with Song Liling (Jin Ha) for regular intercourse (this would be one of the rewrites to the original script), we never quite believe it and as a result, it is hard to sympathize with the character.

Such a misunderstanding might have been possible for someone who never had had relations with a woman before (and who apparently never saw his Chinese lover nude because of "her" modesty), or maybe after only one brief encounter.  But after 20 years? Add to that the fact that Gallimard also is a married man who has had sex with a woman and who probably should have been able to figure out something wasn't quite right. Thus, the basic premise for this play, which won the Tony Award in 1988, has always been lost on me.

Other critics rave about it as a love story (it is loosely based on Puccini's opera Madama Butterfly, in which a Japanese geisha is betrayed by the US Naval officer she loves (catch the opera at the Met this spring: metopera.org) and also is somewhat inspired by the espionage conviction of French diplomat Bernard Boursicot, who had been deceived by a man he thought was a woman. They also will tell you this revival is timely because of political discourse currently taking place about gender. I disagree on both points.

Instead, there is no love story here. How can Gallimard love someone he clearly doesn't know? After 20 years? Though Ha is petit and masters graceful movements in his performances at the opera (opulently staged by Scenic Designer Paul Steinberg, Costume Designer Constance Hoffman with Original Music and Soundscape from Designer Eliot Goldenthal), Ha never, ever looks like a woman. We don't get how Gallimard could have been so deceived.

Gallimard apparently receives comfort and some sexual gratification from the relationship, but doesn't offer much in return -- except to humiliate his lover from time to time, to put him in danger with the authorities and then to turn over national secrets he about how many US troops are being sent to Viet Nam and the like. He marries his wife, Agnes (Enid Graham), mostly to get ahead in his career, then hardly gives her a thought. Like most women in plays that focus on men, she is just there to be cheated on without much character development. To Graham's credit, we do get a sense of this woman's betrayal and hurt, but that just adds to the lack of sympathy we have for Gallimard.

The idea of white man's fantasies about sexual conquest of Asian women is explored a bit, and in view of recent Harvey Weinstein, et. al, scandals where women have been the victims of sexual abuse at the hands of powerful men, this idea isn't one that endears us to those who indulge either. Song Liling is the "perfect woman" created by a man "because only a man knows how a woman is supposed to act," we are told. This doesn't move me. In fact, it makes me angry. So I never feel sorry for Gallimard or understand anything he does.

As for being a timely exploration of transgender issues, where gender "doesn't matter," M Butterfly really isn’t that either. Gender does matter here. Traditionally, women are banned from the Chinese stage, so men play their roles. This is discrimination against women. Here, the male actor has homosexual urges, which are not allowed expression by the Communist government, so he offers to masquerade as a woman to seduce Gallimard and obtain classified secrets in exchange for not being arrested. He even goes so far as to convince Gallimard he has given birth to their son, but it's all deception, not someone in love getting in touch with their feminine urges.....

The production is visually pleasing, from the big-stage operas choreographed by Ma Cong to the starkly lighted prison cell (Lighting Design by Donald Holder). The two hours and 20 minutes with an intermission are surprisingly unmoving, however, except to welcome back Taymor to Broadway following the Spider-man saga. There aren't too many women directors on Broadway stages, so this moves me.

Posted by LaurenYarger at 3:06 PM