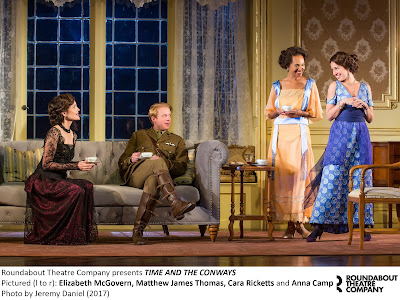 Time and the Conways
By J. B. Priestley
Directed by Rebecca Taichman
Roundabout Theatre Company
Through Nov. 26

By Lauren Yarger
If you could go back 18 years in time, what would you tell yourself?

That's the gist of the evocative play Time and the Conways, which looks at what happens to the members of a family as they journey through two very distinct moments in time.

This play by J.B. Priestley (An Inspector Calls), has sort of been lost in time itself. This is its first revival since it premiered in 1938. Starring as Mrs. Conway is Elizabeth McGovern, a time tripper herself. She first came to attention in 1980 with a role in "Ordinary People" and since has received an Academy Award (for Ragtime) and gone on to cult fandom status as Cora Crawley, the matriarch of the popular British TV series “Downton Abbey.”  The time frame for this drama is similar -- we see the Conways first in 1919 and then again in 1937 -- but except for the period costumes (Paloma Young designs), this is no Downton and McGovern is not sweet Cora.

World War I has just ended and life is full of promise. The family gathers to celebrate the 21st birthday of wanna-be novelist Kay Conway (Charlotte Parry) and the safe homecoming of her soldier brother, Robin (Matthew James Thomas). Mrs. Conway, with her blunt and sometimes inappropriate comments, lets everyone know that she prefers reckless Robin over her other son, Alan (Gabriel Ebert), who has no real ambitions. She's not particularly fond of socialist daughter Madge (Brooke Bloom), either it seems. Daughter Hazel (Anna Camp) is the one with all the right ambition. She has her sights set on marrying a rich society fellow. Younger sister Carol (Anna Baryshnikov -- yes, daughter of the ballet dancer) appears oblivious to any family conflict. She is happy and full of life.

Joining the family are:
-          Gerald Thornton (Alfredo Narciso), the family's solicitor, who has absolutely no influence over the indomitable Mrs. Conway when it comes to talk about managing her wealth or selling their house
-          Hazel's friend, Joan Helford (Cara Ricketts), who is in love with Robin
-          Ernest Beevers (Steven Boyer), a creepy acquaintance of Gerald's from the lower class who has finagled an invitation to the festivities, so he can be near Hazel, on whom he seems to have a crush.

The cross over from the 1919 celebration to the family's future in 1937 is the real star of this show. Neil Patel's set dramatically transforms, and Lighting Design by Christopher Akerlind creates the illusion of time travel as Kay appears to have a vision of what is to come.

In 1937, the family is shattered following a tragic loss. Robin, an unsuccessful travelling salesman, and Joan have married, but they're not happy. Madge is a nasty spinster school teacher and Mrs. Conway's fortunes have been lost. A little port loosens her sardonic tongue even more. Most surprisingly, Hazel is married to Beevers, who it turns out isn't mild mannered and eager to please, but quite sadistically opposite the image we first had of him. Even Mrs. Conway's threats seem to have no influence over him. (Boyer’s got creepy down -- he was the possessed puppet in Hand to God.)

For a brief time, Kay returns to the past and it's this transition that prompts the question "What wisdom would you share with your younger self if you had the chance?" As Alan says,

"But the point is, now, at this moment, or any moment, we're only a cross section of our real selves. What we really are is the whole stretch of ourselves, all our time, and when we come to the end of this life, all those selves, all our time, will be us—the real you, the real me. And then perhaps we'll find ourselves in another time, which is only another kind of dream."

The performances are fierce and the direction by Rebecca Taichman, who won a Tony Award for her Broadway debut last season with Indecent, is precise. The play itself could use a good edit, particularly in the first act, but overall, a very satisfying time at the theater.

The Conways glide through time at American Airlines Theatre on Broadway, 227 West 42nd St., NYC, through Nov. 26. Performances are Tuesday through Saturday evening at 8; Wednesday and Saturday matinees at 2 pm; Sunday matinees at 3 pm. Tickets are $39-$149: roundabouttheatre.org; 212-719-1300

Posted by LaurenYarger at 12:27 PM