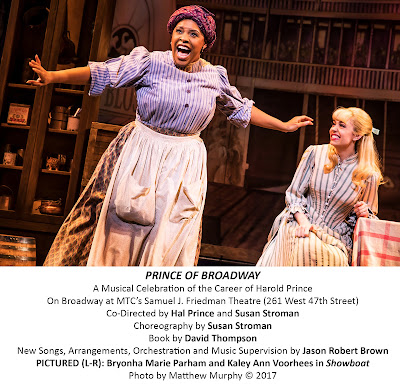 By Lauren Yarger
Hal Prince and I would have been great theater buddies. We apparently love the same musicals.

In Prince of Broadway, theatergoers get to enjoy almost 40 tunes celebrating the career of 21-time, Tony-winner Producer/Director Harold Prince as arranged and orchestrated by Jason Robert Brown (The Bridges of Madison County; The Last Five Years) and Choreographed and Directed by a legend in her own right, Susan Stroman (The Producers, The Scottsboro Boys) with some direction by Prince himself. With almost every number, I found myself saying, "Oh, I love this song," or " I love that show" and finally, I just thought, "Thank you, Hal Prince."

The problem is that if you aren't me, or at least an aficionado of musical theater from the past 60 years, you probably won't know a lot of the songs, or what show they are from, or why those particular songs have been selected. And even if you recognize the songs and shows (or are able to follow along in the Playbill in the dark) David Thompson's uneven book, still might still leave you scratching your head.

The very capable ensemble features Tony Award winner Chuck Cooper (Caroline, or Change; Choir Boy), Drama Desk Award winner Janet Dacal (In The Heights, Good Vibrations), Bryonha Marie Parham (After Midnight, Porgy and Bess), Emily Skinner (Side Show, The Full Monty), Brandon Uranowitz (Falsettos, An American in Paris), Kaley Ann Voorhees (The Phantom of the Opera, Candide), Michael Xavier (Sunset Boulevard, Into The Woods), Tony Yazbeck (On the Town, Gypsy), and Tony-Award-winner Karen Ziemba (Contact, Curtains). There just is no rhyme or reason to why they are performing the songs which recreate moments from the Prince theater repertoire (in many cases faithfully reproduced visually by Scenic and Projection Designer Beowulf Boritt.)

All of them speak in the voice of Prince. Some of the shows are identified; some background is given and logos from some of the shows are depicted through projections. (A critic colleague seemed to think they all had been, and perhaps they weren't visible from my seat, but I didn’t see them all.) At any rate, I jotted notes about how I thought many audience members wouldn't be able to identify numbers like "Tonight at Eight" and "Will He Like Me?" from 1963's She Loves Me or "Dressing Them Up," from 1993's The Kiss of the Spiderwoman.

There are some other selections from Follies, Parade and Merrily We Roll Along that might evade identification by the more casual theatergoer too.  "You've Got Possibilities" from the hardly known 1966 musical "It's a Bird, It's a Plane. . . It's Superman" at least is properly identified and explained.

There's no reason why "Heart" from Damn Yankees or "If I Were a Rich Man" were singled out to represent those shows (the latter causing some negative comments from colleagues – particularly Jewish reviewers – about the casting of Cooper at Tevye,) when other shows got two or three songs. 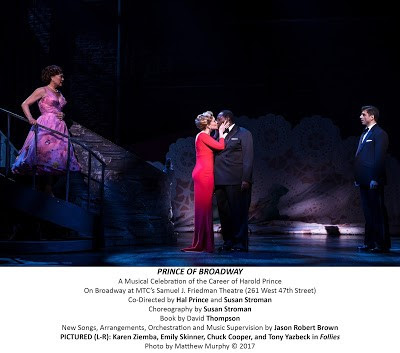 There are some wonderful moments: Parham is sensational as Queenie in "Can't Help Lovin' Dat Man" from Showboat and Ziemba is a saucy, meaty Mrs. Lovett in the medley of tunes from Sweeney Todd. I immediately wanted to see them both in revivals of those shows. Skinner delivers the most moving "Send in the Clowns" from A Little Night Music I ever have heard -- and I saw Glynis Johns in the original production so that is saying something. Goosebumps. This number alone is probably worth the ticket price to this show.

Posted by LaurenYarger at 1:25 PM