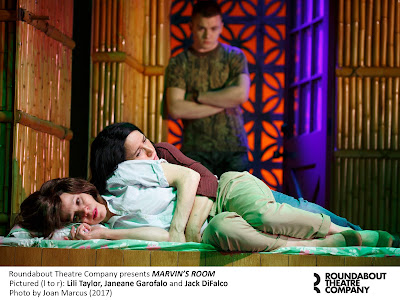 By Lauren Yarger
What's It All About?
Family and choices are at the center of Scott McPherson's Marvin's room, getting a limited run by Roundabout Theatre Company. Anne Kauffman makes her directorial Broadway debut for the play, which stars Janeane Garofalo, Celia Weston and Lili Taylor. McPherson's play had been turned into a film starring Meryl Streep and Diane Keaton, among others, but this is the first time it has played the Great White Way.

Two siblings are reunited after a long separation when Bessie (Taylor) discovers she is ill and may need a bone marrow match from her sister, Lee (Garofalo), or one of her nephews: young and nerdy Charlie (Luca Padovan), or troubled teen Hank (Jack DiFalco, who reminds of Leonardo DiCaprio, who starred in the film). He burned down his family;s house and has to get permission from his therapist, Dr. Charlotte (Nedra McClyde), to join his mother and brother for the trip to Florida t see the aunt he never has met. He's not sure he even wants to be tested, however, even if Bessie might die without his help.

As it turns out, Bessie easily bonds with her nephews who rebel at Lee's parenting, which is a mix of over-protection and lack of interest. Meanwhile, the family must come to terms with some realities in the face of Bessie's illness, treated with ineptitude by Doctor Wally (Triney Sandoval). Who will care for their father, Marvin (Carman Lacivita), who is bed-ridden in the next room (shown only in shadows and silhouette in Laura Jellinek's set design which morphs into a number of different locations) if Bessie no longer can? Lee made a decision long ago to put her own needs ahead of caring for him and left it all to her sister deal with while she moved away, started a family and went back to school. Bessie's not bitter, however, and considers it a privilege to look after Marvin and her increasingly dependent and needy Aunt Ruth (Weston). The characters find how far the bonds of family can stretch.

What Are the Highlights?
Very good performances across the board and insightful direction by Anne Kauffman allows the characters to express their true feelings in looks, tone and body language, where the dialogue creates a false impression that everyone isn't as unhappy as you think they must be....

What Are the Lowlights?
I have always found this play very depressing. It's a play about lost dreams and facing the realities of life, so the material is serious and we don't expect a comedy (though the hapless doctor is intended as some comic relief, but for anyone who has actually dealt with doctors and hospitals on a regular basis, incompetent health professionals are nothing to joke about). The characters never ring true, however. Bessie doesn't have any resentment? Really? Lee can't get over her failed marriage enough to love her own kids? And can we really believe that someone who long ago abandoned her father, aunt and sister without so much as a word or a penny of financial help would suddenly feel compelled to drop everything to donate some marrow and offer up her sons as candidates for the grueling procedure too?

Most annoyingly, why is this play called Marvin's Room? None of the action takes place there. We don't see Marvin and only hear him moan occasionally. Elephant in the Room, maybe, because there is a whole lot of unspoken tension that never gets spoken or resolved.

Posted by LaurenYarger at 12:20 AM