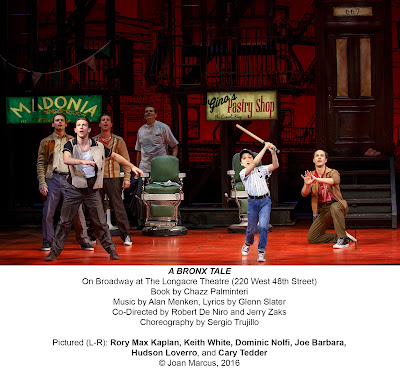 By Lauren Yarger
It's another movie made into a musical, and one that I wasn't sure would make the transition, but there's something about the new Broadway version of A Bronx Tale that just won't let you give it a Bronx cheer.

Maybe it's the weight of some of the names behind this film-to-stage endeavor. Alan Menken (Aladdin, Beauty and the Beast and many others) composes the score with lyrics by Glenn Slater (The Little Mermaid, School of Rock, Sister Act). The book is by Chazz Palminteri, (who has a slew of film writing and TV acting credits under his belt), based on his one-man show A Bronx Tale which inspired his Academy-Award-nominated film of the same name. And that's before I mention that Robert DeNiro (who starred in the film) co-directs here with legendary director Jerry Zaks.

If those names aren't enough to make us take notice, there is a 30-member cast on stage and that is before I tell you that the excellent Sergio Trujillo choreographs.

So what's it all about? An older Calogero (Bobb Conte Thornton) reminisces about growing up in the Bronx in the 1960s. The young "C" as he is known, idolizes both his hardworking, bus-driver father, Lorenzo (a beautifully voiced Richard H. Blake), and Sonny (Nick Cordero), the local mobster who takes a liking to the boy (played by Hudson Loverro and at certain performances by Athan Sporer).  Lorenzo doesn't like the influence Sonny has on his son, or the fact that he can't compete when it comes to throwing around money and influence.

The lyrics and book seem a bit weak and unnecessarily telegraph action. The women characters -- C's mother, Lucia Giannetta, and Ariana Debose as Jane, Calogero's African-American girlfriend, who causes his some angst in an era that has the races separated outside of school and on opposite sides of the battle lines outside, for example,  -- are mostly window dressing.

Still, there's something moving about the relationship between Calogero and his father and that, plus a pleasing score by Menken and a run time of just over two hours keep us interested.

A Bronx Tale evolved from the one-man Off Broadway play written and performed by Chazz Palminteri in 1989. During the original Off Broadway and subsequent Los Angeles engagements, Robert De Niro saw the show, and brought the story and star Palminteri to the screen in 1993, making his film directorial debut in the process. Following the success of the film, Palminteri performed the one-man show A Bronx Tale on Broadway in the 2007-2008 Season.