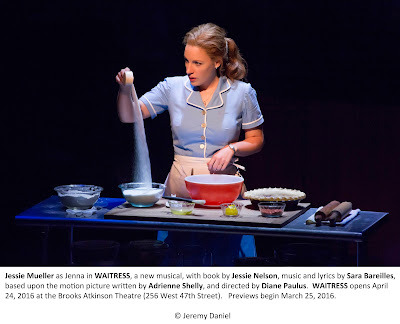 Waitress Serves Up a Slice of Life Women Can Understand
By Lauren Yarger
The endearing new Broadway musical Waitress, based on Adrienne Shelly’s film and featuring a score by pop singer/song writer Sara Bareilles, serves up a satisfying helping of just what I have been asking for: a show featuring women on stage dealing with women’s issues.

The show is written by women featuring a number of women characters dealing with issues common to many women. So if one more person refers to this show as “chick flick,” I might be tempted to hit them in the face with a pie. There are plenty of them to be had in this production as two cases tower either side of the proscenium in Scott Pask’s set transforming the Brooks Atkinson Theatre into a pie-serving diner where ushers dressed like waitresses sell snack cups with pie during intermission when the smells of mouth-watering baking pour into the house.

The ambiance invites us to take up a stool at Joe’s Pie Diner where Jenna (Jessie Mueller, who won a Tony for her moving portrayal of Carole King in Beautiful) finds solace in creating pies. The working of the dough and creativity of finding just the right blend of flavors give her an outlet to express her emotions and the activity brings her comfort as she remembers learning the craft from her mother.

The pies reflect what she is experiencing in life and are given names like “Couch Potato Pie,” “Humble Crumble Rhubarb,” “Mama’s Lavender Lullaby” or "Up a Stream Without a Banana Cream.” If they don’t all sound happy, that’s because Jenna’s life isn’t.

Husband Earl (Nick Cordero) is no longer the man of her teenage dreams. He is pretty useless, really, except when demanding Jenna’s hard-earned tip money.

“How’d we do today?” he asks, even as his hot temper causes him to lose his job. Right about here, I wanted to strike him with a rolling pin (this can’t be a fun role for Cordero to play night after night).

He drinks a lot and we get the impression (through some of Diane Paulus’ direction) that he might be physically abusive, though this is not depicted on stage.

There is a bigger problem than the tensions in their relationship, however. Jenna is pregnant. Order up: “Betrayed By My Eggs” pie

Her waitress friends at the diner, Dawn (Kimiko Glenn) and Becky (a delightful Keala Settle), hide her condition from Earl and their boss, Cal (Eric Anderson), until she figures out what to do. Finally, Jenna decides to save up to enter a baking contest and use the prize money to leave Earl.

The friend characters don’t get a lot of development, but what is there is interesting. Wisecracking Becky, whose husband is ill, finds unexpected companionship with crusty Cal who normally serves as her verbal sparring partner. Shy, insecure Dawn finds dating success with enthusiastic and humorously persistent Ogie (Christopher Fitzgerald). Jenna might even get a second chance at love with handsome Doctor Pomatter (Drew Gehling), though there is a lack of visible spark between the actors to convince us of this.

Though the pie names and some of their ingredients aren’t exactly appetizing, the book by Jessie Nelson (known for her screenplays for “I Am Sam,” “Stepmom” and “The Story of Us”) provides a slice of life to which many women can relate (Lorin Latarro’s choreography adds to the storytelling). We’ve either tasted this pie filling or know someone close who has and Bareilles’ music and lyrics are the cherry on top. The ballad “She Used to Be Mine” had me leaning in to hear every word of the lyrics, not only because the sentiment was wise and genuine and seemed to be speaking to my heart, but because Mueller can be difficult to hear at times (I don’t think it is the fault of Sound Designer Jonathan Deans; it seems to be Mueller’s enunciation.) Listen to a clip below.

At any rate, this self-discovery story touches a chord with the audience, which most women’s stories do since 65 to 70 percent of theater ticket buyers are women. So while I would offer a recipe for some garnishes (Paulus should tone back the yell singing by Glenn and Settles, for example, and not shy away from the abuse element -- making that real might cause women to recognize themselves and seek help,)

Waitress and its really pleasing score are a winner, I am in love with a recurring few lyrics sung about sugar, butter and flour that are a mixture of love and hope shared among the generations of bakers. Music Supervision and Arrangements are by Nadia DiGiallonardo; Orchestrations are by Bareilles and the Waitress Band.

Diner owner Joe (Dakin Matthews) offers a wonderful example of how one person can make a difference in someone’s life.

Posted by LaurenYarger at 10:37 PM