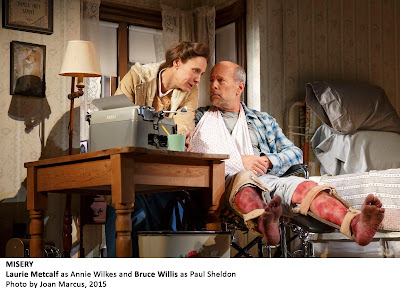 By Lauren Yarger
It has all of elements of the book and the movie: a helpless author, trapped in a remote house with his crazy "number-one" fan. The stage version of Stephen King's chilling novel Misery also offers film star Bruce Willis making his  Broadway debut opposite a formidable Laurie Metcalf.

The parts you remember from the book and movie (starring James Caan and Kathy Bates) are there, so you will recognize the story easily, but so is something else you might not be expecting: laughter.

The audience roars at some of the most horrifying moments in this psychological drama. It took me by surprise at first, then I came to appreciate it, if not feel comfortable with it.

Director Will Frears, and Metcalf in particular, seem to embrace the fact that many of the folks sitting in seats already know the story and create a feeling of empathy with Willis' character. We know what he is feeling and we know exactly what is going to happen to him, so the laughter usually is sympathetic. It's just unexpected at first, because if you ever have watched Bates' chilling performance or sat with the blanket pulled up over your head while reading the gripping novel, you probably weren't laughing.

The story (adapted for the stage by William Goldman) is set in the snowbound home of Annie Wilkes (Metcalf) in a remote part of Colorado. Paul Sheldon (Willis) awakes in Annie's home following a car crash that has left him bedridden with two broken legs and other injuries. The snow storm  has taken out phone lines and closed the roads into town, but Annie, who apparently has some medical training, has set the fractures and pumped Paul full of painkillers.

While Paul can't wait for the phones to come back so he can contact his agent, Annie couldn't be happier at the turn of events. She is the self-proclaimed, number-one fan of Paul's series of novels following the adventures of a protagonist named Misery, and as his number-one fan she knows that he was in the area to finish a book, the only copy of which was on the front seat with him when the car crashed.

Annie begs for an opportunity to read the new manuscript, and Paul, appreciative of her help, agrees to let her have a look.

The book isn't what Annie was expecting, however, and when she discovers that Paul has killed off Misery and brought an end to her adventures, Annie appoints herself editor and insists Paul rewrite the story. As Annie's unstable mental condition becomes evident, Paul tries to keep the woman appeased while planning to escape. Annie takes extreme measures to keep Paul on task, however -- yes, the hobbling scene is gruesomely depicted, though to roars of laughter, which is kind of more frightening than the act itself, if you think about it.

Leon Addison Brown completes the cast as Buster, a police officer who suspects that all might not be well at the Wilkes' house, the rooms of which are revealed by a revolving stage designed by David Korins, who put his budget there,  rather than into the very fake-looking snow on the exterior of the house.

Metcalf, as always, is brilliant. Behind the smiling, adoring fan is a manic, dark, sadistic misery just waiting to rear its ugly head. Willis, on the other hand, is strangely one-dimensional, as though trying with all effort not to let any part of his "Die Hard" or other super-hero film characters be seen. As a result, Paul doesn't seem very afraid of Annie and even appears to be OK with her mistreatment. We don't get a sense of the author trying to mask his terror, agony or despair.

If we did, it would be harder to join in the laughter, I suppose. I enjoyed it, but was expecting more from this 90-minute, no-intermission adaptation. Lighting design by David Weiner, sound design by Darron L. West, and original music by Michael Friedman don't create the suspenseful, on-the-edge-of-your-seat feel that should be there.