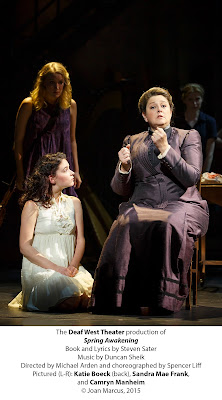 Expressing Teen Angst, Sexual Awakenings in a New Way
By Lauren Yarger
There’s nothing new about teens exploring their sexuality, or thinking that parents are too uptight to understand, but this story gets a whole new telling by Deaf West Theatre in a Broadway revival of Spring Awakening featuring performances in both spoken English and American Sign Language.

Composer Duncan Shiek’s rock score, paired with Steven Sater’s lyrics and book, based on Frank Wedekind’s controversial 1891 expressionist play of the same name, changed musical theater when it premiered on Broadway. The music, the action (with its shocking moves and explicit lyrics) and its very young cast (except for the few uptight adult characters) struck a chord with audiences and critics and in 2007 it won seven Tony Awards, including Best Musical. Many hailed it as the Rent or Hair for a new generation.

Personally, I love the music. The score is exciting and is almost a character in itself as it helps to express the emotions felt by those singing the tunes. The story and lyrics, however, have never been a favorite. I just can’t get excited about a bunch of sexual experimentation – some of it sadomasochistic in nature – glorified as something we should embrace or risk being labeled as uptight and out of touch. I’d rather embrace loving and safe relationships…. (and yes, if you are wondering, Hair isn’t a favorite of mine either. Great music – and in the case of the last Broadway revival, great staging – but a message of risky and immoral behavior I can’t embrace there either.)

Not exactly what I’d pen as a love song.

That said about the themes of this musical, I won’t dwell on them, but let me assure you that deaf end’s production is well worth seeing. The troupe’s last Broadway appearance was with the excellent production of Big River in 2003, which also incorporated sign language with the dialogue and lyrics. Michael Arden expertly directs the action, which has some characters like Wendla (Sandra Mae Frank) Moritz (Daniel N. Durant) and Frau Gabor (Marlee Matlin) portrayed by deaf actors using sign language, while other actors, most of whom also play a musical instrument, provide the speaking and singing voices for those characters.

The staging is such that both actors become the character. Additional supertitles are incorporated into projections (design by Lucy Mackinnon) onto the three-story set designed in shades of grey (how appropriate given the S&M themes….) by Dane Laffrey, enhanced by excellent Lighting Design by Ben Stanton to help keep focus amidst the large cast of 28. The set does double duty, housing the small band which often plays to tunes at a slightly slower pace than expected. I am not sure if this is to accommodate needs signing of the lyrics, but it does disappoint if you are a fan of the score. Also lacking something in comparison to the original soundtrack (which fans have been listening to for years) are the vocals, with the exception of Katie Boeck, who lends a beautiful singing voice for Wendla.

Maitlin (who won an Academy Award for her performance in Children of a Lesser God) gives effective portrayals as the mother of the protagonist, Melchior (Austin P. McKenzie). Providing her voice is a fabulous Camryn Manhein (TV’s “The Practice” and “The Ghost Whisperer”), who stands out with humor as school mistress Knuppledick. Every time she addressed Headmaster Knochenbruch (Russell Harvard), I rolled with laughter. Her comedic chops also made piano teacher Fraulein Grobebustenhalter, about whom Melchior’s friend Georg (Alex Wyse) fantasizes, very amusing.

Melchior’s carefree behavior and rebellion are a catalyst for much of the show’s action (and the character is ably portrayed by McKenzie). He wonders about the origin of shame and believes that it is a product of education. He encourages close friend Moritz to embrace his sensual dreams and introduces Wendla to sex at his “special thinking place” while indulging her need to be punished. Her fate involves an abortion and death.

A friend, driven to achieve success by uncaring parents dies “Left Behind” the scene is very moving and effectively staged.

To take in the excellent performances, however, you need to be prepared for potentially offensive content. The show posts a Mature rating and contains nudity and all kinds of sexual activity. Some of the titles of the songs are so explicit that I can’t list them here. You can go hear them in person, if you wish, through the end of this limited-run engagement which closes Jan. 24, 2016 at the Brooks Atkinson Theatre, 256 West 47th St., NYC.