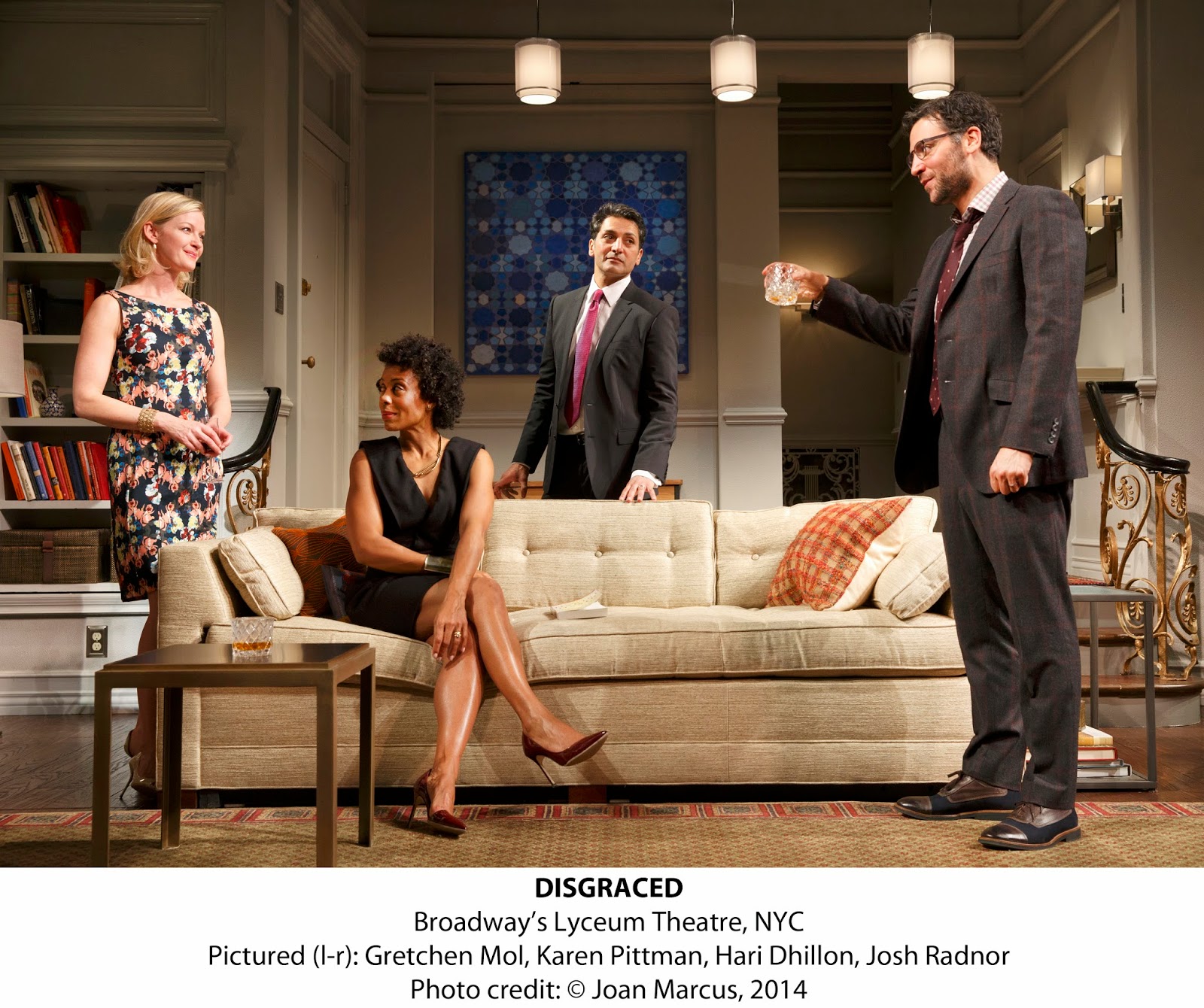 Thought-Provoking Play Probes Religious, Ethnic Ties We Think We Understand
By Lauren Yarger
“I’m not prejudiced.”
“All Muslims are….”

If either of those two statements sounds intriguing, Ayad Akhtar’s Pulitzer-Prize-winning play Disgraced might just be the next Broadway ticket for you.

In the course of an evening, a Muslim, a Jew, an African-American and a WASP start talking religion. It gets messy.

Amir (Hari Dhillon) is a former Muslim – if there can be such a thing is one of the themes explored here – who has decided to worship his career as a mergers and acquisitions attorney in New York instead of the religion into which he was born. Besides, he just can’t embrace the archaic Quran and the religion it promotes. Accused of just “going through a phase” by his nephew, Abe (Danny Ashok), who has Americanized his name from Hussein, Amir replies that the phase is called “intelligence.”

If Amir feels a pull toward his Pakistani roots, it is because his WASPy American artist wife, Emily (Gretchen Mol “Boardwalk Empire”) defends the religion and continually praises the beauty and wisdom she finds in her studies of Islamic art. Her latest works have been influenced by it and earn her a place in a show produced by Isaac (Josh Radnor “How I Met Your Mother”). Emily influences her husband so much that he gives in when Abe and she beg him to help an imprisoned imam accused of having terrorist ties. Appearing to support the mosque leader has unpleasant professional consequences for Amir, however.

When Isaac and his African-American wife, Jory (Karen Pittman), who is an attorney vying for the same partnership at Amir’s mostly Jewish law firm, come to dinner at Amir and Emily’s swank Upper East Side apartment (nicely appointed by Designer John Lee Beatty), Amir has a few too many and all hell breaks loose as the conversation goes from “all religions have idiosyncrasies” to a hate-filled round of “your religion is bad.”

Turns out Amir isn’t as removed from his religious upbringing as he thinks. He certainly has some opinions that offend his Jewish and African-American guests (and us) like thinking that blowing Israel off the map is a good idea and feeling “tribal” pride over the 9/11 terrorist attacks. Later, Emily and Jory both tragically find that their husbands’ views about how to treat their wives aren’t what they thought they were either.

It’s a disturbing play on many levels, made so by unspoken truths which eventually are voiced. It is intelligent and witty (Radnor in particular delivers many of the play’s humorous lines with expert timing). We don’t want to have to talk about these things, let alone discuss them over dinner with friends, but the characters (all excellently portrayed) don’t give us any choice.

There is no escape (there’s no intermission) and we are forced to explore some of the deep-rooted thoughts we have about religion. We also have to face the fact that the ugliness on stage could show up at our next dinner party too if we and our guests were to serve up honest opinions about religion and its place in today’s world.

Akhtar gets points for being able to bring so much out into the open in just 85 minutes. It’s well written and it makes you think. The awarding of the Pulitzer, however, seems a bit overdone for the first stage play by the actor and author of the novel “American Dervish.” Using liquor as a plot device to unleash the rage within Amir, for example, and the convenience of an affair between two of the characters all seems a bit trite.

The Pulitzer isn’t the only award Disgraced has received, however, so what do I know? Previous productions in Chicago and Off-Broadway, both also helmed by Director Kimberly Senior, received Jefferson and Obie awards.

Christians might also like to know:
-- Language
-- God's name taken in vain
-- Violence
Posted by LaurenYarger at 10:19 AM