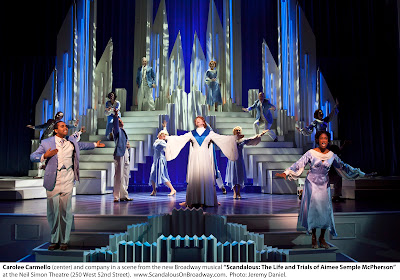 What's it about?
Well, it's like the title says: the life and trials of Aimee Semple McPherson (Carolee Carmello), the first real superstar evangelist (this is 1927) and founder of the Foursquare Church (the Foursquare Foundation is a producer of this show). McPherson leaves her stern, religious parents, Minnie and James Kennedy, (Candy Buckley and George Hearn) to marry first husband, Robert Semple (Edward Watts), an Irish missionary. He dies, shortly after their marriage, while on a mission in China, leaving Aimee pregnant. She and her infant daughter return home. When she almost dies giving birth to a son with second husband, Harold McPherson (Andrew Samonsky), Aimee has an epiphany of sorts, and decides to preach the gospel. She leaves Harold and the kids behind to start a ministry managed by her mother in Hollywood, where sermons are preached in a large, hokey, theatrical manner (the grand sets are by Walt Spangler) and where Aimee is suddenly the belle of the press corps. The "scandalous" part really comes in when Aimee suddenly turns up missing, then claims to have been kidnapped, but possibly was off cheating on much younger third husband, David Hutton (also Watts)  with married church employee Kenneth Ormiston (also Samonsky).

What are the highlights?
Carolee Carmello belts her heart out and manages to gives Aimee some depth of character with spirit and enthusiasm. She might earn award nominations. Hearn adds some gentle touches as Aimee's father. Roz Ryan's performance as a converted brothel madame brings some comic relief and another terrific singing voice to the mix.

What are the Lowlights?
Too many to waste time discussing here, given that almost universal pans by the critics have resulted in the show's announcing an early closing date of this Sunday. "w'ere out of time; we need a miracle" goes some of the dialogue. Turns out to be prophetic.

Posted by LaurenYarger at 1:35 PM