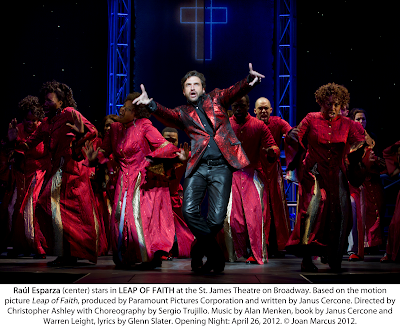 Summary:
In between when I saw this and when I was able to post the review, the show announced it was closing (today, May 13). I give it a quick through here so you will have some idea about it since it was nominated for a Tony Award for Best Musical, and if by some miracle it wins, there could be a tour of it.

Based on the movie starring Steve Martin, Leap of Faith is the story of conman Jonas Nightingale (Raul Esparza) who travels with his fake tent revival church managed by his sister, Sam (Kendra Kassebaum) and bookkeeper Ida Mae Sturdevant (Kecia Lewis-Evans), who heads the choir. When their bus breaks down in out-of-the-way Sweetwater, Jonus decides to  pop his tent (nicely designed by Wagner) and bilk the poor townfolks out of whatever money he can, especially when he intimates that that his revival services and prayer will bring much needed rain to the drought-ridden town. On to his schemes, however, is sheriff Marla McGowan (Jessica Phillips), who gives him two days to get out of town. Sam urges Jonas to use Marla's wheel-chair-bound son  Jake (Talon Ackerman) as the focus for his "healing" service since the boy really believes in miracles. Visiting, however, is Ida Mae's seminary-student son Isaiah (Leslie Odom, Jr. of TV Smash fame), who starts to, well preach to the choir, and prick at the consciences of his mother, his sister, Ornella (Krystal Joy Brown) and other members of the Angels of Mercy Choir about what they are doing. A romance between Jonas and Marla complicates things as well.

Highlights:
The choir, some 15 strong, sound good, and OK, I am a sucker for good old gospel-sounding music in a Broadway theater. Odom has a lovely voice and brings depth to his character, torn between loyalty to his family and a sense of right and wrong and his calling to genuine ministry for God. There are some nice questions about faith addressed. At one point, Marla bitterly scoffs at her need for God. "If God's plan was to take my husband and put my son in a wheelchair, then no thanks," she says. I'm not sure it ever is made clear that she isn't seeing that clearly, though. In fact, there isn't much of the good word in the revival services -- just emotionally packed conclusions to them.

Lowlights:
If only Jonas really could perform miracles and heal this show... The book is weak and repetitive. The score is pretty boring. Not one of Meken's best. The production had the feel of not quite being ready, an indeed may have been rushed in its development to hit the Broadway stage in time for a Tony nomination (the one for best show is the only one it received). Trujillo's choreography was uninspired (no pun intended, and I have never seen church choirs move quite like that, even in churches where they get into their music). The vocal and acting skills needed for little Jake are more than young Ackerman has yet attained and most disappointing was Esparza himself who frankly seemed miscast. The engaging, fine voiced actor certainly has proven his Broadway chops in past endeavors, but here, he seemed out of place and without charisma.

The show goes to a better place today at the St. James Theatre.
Posted by LaurenYarger at 1:58 PM