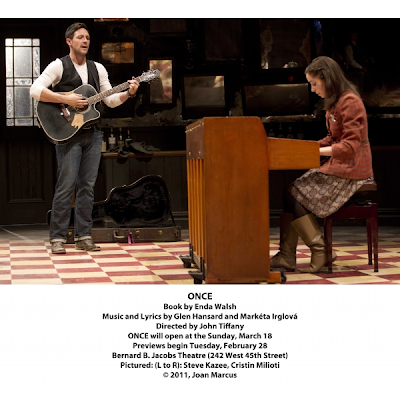 Once in a While, a Broadway Show is Magic
By Lauren Yarger
The low-budget motion picture "Once," which won a 2007 Academy Award for music-and-lyric team Glen Hansard and Marketa Irglova for their song "Falling Slowly," has been recreated for the Broadway stage in a wonderfully rich, soul-stirring musical that makes us want to see it more than once.

Enda Walsh writes the book for the stage version of the film written and directed by John Carney that tells the story of a Dublin songwriter and the woman who inspires him. Directed here by John Tiffany with fanciful, tale-propelling choreography by Steven Hoggett and Musical Supervision by Martin Lowe,  the actors/musicians assume roles at various locations (with lighting and sound by Natasha Katz and Clive Goodwin that help define them) or take seats along the perimeter of the set, which resembles an Irish pub (Bob Crowley designs it and the costumes). The pub is decorated with picture frames and mirrors, the largest of which reflects a portion of the audience up into the action on stage (the audience also is invited up on stage pre-show and during intermission for a little party).

The songwriter, defined only as Guy (Steve Kazee), is at the end of hope. His love has left him for America and his song-writing career isn't going anywhere. About to give up, he meets a blunt-talking, no-nonsense Czech Girl (Christin Milioti) who inspires him to take up his guitar again.

The two bond on a very deep level, despite the fact that Guy hopes to pursue his lost love to America and Girl, raising her little daughter Ivanka (Ripley Sobo) with the help of her family, is married to an absentee husband. Inspired by Guy's music, Girl writes some lyrics to unfinished pieces and convinces Guy he must perform it. Over five days, they collaborate and record a demo CD. Assisting them are Billy (Paul Whitty), who, smitten with Girl, allows her to play a piano in his music shop, a banker (Andy Taylor), who is moved by Girl's persuasive plea and funds the recording session, and Guy's Da (David Patrick Kelly), who helps his son get to New York.

The memorable, soul-touching catchy tunes, thoroughly developed characters (even the minor ones) and a heartwarming story dotted with delightful humor all blend to make this a ballet of love and hope that you'll want to enjoy more than once.

The ensemble is top-notch and Kazee and Milioti blend beautifully on duets (though it is very hard to here Milioti on solos). Milioti's delightful, full-of-life character who repeatedly assures everyone she is serious about her big plans and dreams -- "I'm Czech; I am always serious -- is one of the most memorable to grace a Broadway stage.

Christians might also like to know:
-- God's name taken in vain
-- Language
-- Sexual dialogue
Posted by LaurenYarger at 10:45 AM

Lauren, my sister and i finally got down to New York to see "Once". Spellbinding! We loved the choreographed scene changes and the simply mesmerizing set. And yes, every individual character has enough depth for his/her own 2-hour play. And what a lovely theatre!