Theater Review: Wonder of the World 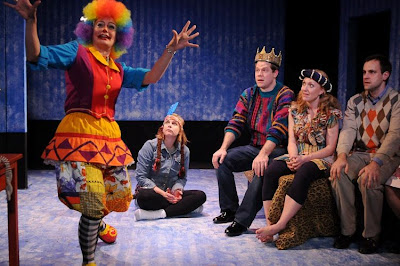 Zany Lindsay-Abaire Comedy Marks Theater Company's Off-Broadway Debut
By Lauren Yarger
An effervescent leading lady, a couple of good comedic turns and attention to detail from director Brian Gillespie, not to mention a revival of Pulitzer Prize winning playwright David Lindsay-Abaire’s delightful play Wonder of the World, combine to make an entertaining night at the theater and a solid debut for Pull Together Productions’ first Off-Broadway show.

Katharine McLeod is the effervescent one, starring as Cass (the role created by Sarah Jessica Parker when the play premiered at Manhattan Theatre Club in 2001), who heads to Niagara Falls on a journey of self discovery following a betrayal by her husband, Kip (Aaron Blakely). As she checks off a list of more than 200 things she always wanted to do before saying “I do” to Kip, she meets Lois, an alcoholic bent on getting revenge on the husband who abandoned her by throwing herself over the falls in a barrel -- a pickle barrel that she carries around with her -- which makes the revenge more sweet because her husband loves pickles. An unexpected friendship springs up between the two women.

Along the way, Cass has an affair with Captain Mike (Michael Poignand), who pilots one of the Maid of the Mist tour boats on the river, and meets up with two inept, bumbling private detectives, Karla and Glen (Evangeline Johns and Tom Logon), who need some marriage counseling themselves. Turns out Kip hired them to find Cass, because he wants another chance. Blakely is a master of comedy as the phobia-driven husband afraid of clowns, among other things, who pines away for his missing wife while watching videos of their wedding and hearing “their song” on the radio.

The whole crowd eventually ends up in Cass and Lois’ motel room. Enter Janie (Bryn Boice), Karla and Glen’s marriage therapist, who comes over in a clown costume (much to Kip’s horror) to conduct a session of the “The Newlywed Game” to help this bunch of looneys figure out what they really need and want. Boice also shines comedically as a helicopter pilot, a woman Cass and Lois meet at the falls and as waitresses in three different tourist-trap restaurants.

Gillespie keeps the pace quick and uses fun gimmicks like toy boats and helicopters to lend to the zany mood of the play. As a song appropriate to the action plays in between scenes, cracker-jack stage crew members quickly change a platform, a railing and a few pieces of furniture into designer Emily Lippolis’ clever renditions of various settings (loved the triple-threat wooden hoop that serves as a dressing-table mirror, a ship’s wheel and a car steering wheel).

Gillespie needs to rein in Benson, however, who expresses most of her emotions by shouting them. It’s catching, as other actors in the scenes begin shouting their lines too. In fact, the scene where everyone is shouting over the noise of the falls (nicely created by sound designer Andy Leviss) doesn’t seem all that different from some of the others. Lindsay-Abaire’s terrific dialogue doesn’t need amplification; his intertwining of events in the lives of these over-the-top characters is skilled playwriting with precision. When Benson did deliver a couple of lines in a softer tone, they were very funny and far more effective.

Wonder of the World runs through June 26 at the Shell Theater on the fourth floor of the Times Square Arts Center, 300 West 43rd St., NYC. Performances are Thursday through Saturday at 8 pm with a Wednesday, June 16 performance at 8 and a Sunday evening performance on June 20 at 7. Tickets can be purchased through SmartTix at http://www.smarttix.com/ or by calling 212-868-4444. For more information about the company, visit http://www.pulltogetherproductions.org/.

Christians might also like to know:
• Language
• Sex outside of marriage
• God’s name taken in vain
• Sexual dialogue. I don’t want to give anything away, but Kip’s betrayal of Cass involves a rather nasty sexual practice.
Posted by LaurenYarger at 4:04 PM