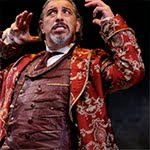 A Devilishly Clever Performance
By Lauren Yarger
Max McLean is a deliciously loathsome demon giving advice on how to keep humans from following God (and in consequence, dispensing some sage insights into how we allow the enemy to trip us up) in a slick Off-Broadway presentation of C.S. Lewis’ The Screwtape Letters.

McLean (right, photos courtesy of Fellowship of the Performing Arts) has been touring the show, co-adapted and directed by Jeffrey Fiske, for a number of years, and practice has paid off. This version is tighter and more polished than the show that ran here in New York a few years ago.

Screwtape, a sort of dean of devils, writes a series of letters to his nephew, Wormwood, a recent graduate of the Tempters' Training College for young demons, who has been assigned to lead his first human subject to claim him for “our father below” and away from the “enemy” above. Sitting in large leather chair in his hellish quarters, glowing red and lined with the bones of human skeletons (Cameron Anderson, set design; Jesse Klug, lighting design), he dictates his advice, then closes each one with, "Your affectionate uncle, Screwtape," accenting the "P" heavily and triggering a crackling sound, as though the letter is sealed with a flame. 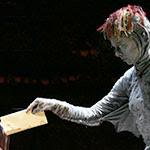 His servant demon, Toadpipe (Karen Eleanor Wight, right), climbs a curved staircase to deliver the missives to a postal box not unlike a bank suction tube that sends them up to the waiting Wormwood.

McLean is both comical and scary as he suggests ways for Wormwood to keep his “patient” away from things that will lead him to God. When that fails, and the man becomes a Christian, the senior demon helps his protégé plan a strategy to keep the human from becoming too serious about his new-found faith and to stealthily direct him back towards hell.

“Bring us back food,” Screwtape cautions his nephew, “or be food yourself.”

You can almost hear him licking his lips in anticipation of devouring the man’s soul.

The adaptation captures much of Lewis’ dry wit and sage insight in the dialogue (a memorization tour de force for McLean) and more than once the audience gives a collective, cognitive "hmmm" as the truth of the enemy’s strategy and purpose is revealed.

“A moderated religion is just as good as no religion at all,” he says knowingly.

Wight, who has no lines but only grunts in a devilish way while crawling around gnawing on a bone or transcribing Screwtape’s words onto paper with a claw, is quite entertaining and wears a vivid costume designed by Michael Bevins. She also acts out the parts of humans Screwtape uses as examples in his letters to Wormwood. John Gromada’s original music and sound design, including select prerecorded pieces that help lend an other-worldly effect to Screwtape’s voice, complete the effect.

It’s a powerful production and enjoyable whether you are a C.S. Lewis fan or are asking, "C.S who?" Don’t miss it at the Westside Theatre, 407 West 43rd St., NYC. For tickets, visit http://www.fpatheatre.com/current/nyc.

Special Note: Hell freezes over at the Westside Theater where it is really cold during the 90-minute presentation without intermission. Bring a sweater or jacket and hit the restroom before.
Posted by LaurenYarger at 12:56 PM