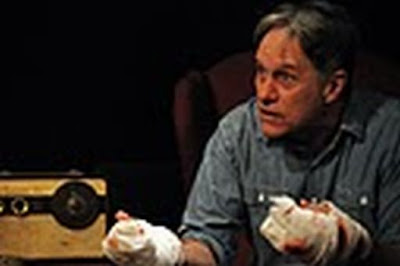 Michael Cullen
This Home seems Anything but Safe
By Lauren Yarger
The Hollytree home in Buffalo, NY seems anything but a safe place to come back to, but that's what Jim (Michael Cullen) wishes for his son, Lucky (Eric Miller), before he goes off to the Korean conflict in Sean Cullen’s first play, Safe Home, in its world premiere Off Broadway at Women’s Interart Center.

The relationship between father and son hasn’t always been easy, nor have the relationships between Lucky and his brother, Pat (Erik Saxvik), or any of the family with mother, Ada (Cynthia Mace).

Lucky, who forms a friendship with the foreman at the local plant where his father spends days burning his hands in acid as a radiator man, might just steal his father’s job away. Most of the time, he spends his time drinking and gambling and avoiding his family. As an escape, he enlists over his family’s objections and is sent to Korea.

While he’s there, he writes a series of letters to local girl Claire Baggot (Katy Wright Mead) who falls in love with him. The Hollytrees are unaware of their relationship. The dysfunction continues as the mother attacks Pat with a screwdriver, the parents all but ignore their youngest son, John (Ian Hyland), they mistreat Claire when they do find out about her relationship with Lucky and reveal that they, themselves, don’t have much of a loving husband-wife relationship either.

Why they all hate each other, we’re never sure. Playwright Cullen, who portrays Lt. Cmdr. William Harbison in Broadway’s South Pacific and who has been in the movies "Michael Clayton" and "Revolutionary Road," apparently based the characters own his own family members, so maybe he knows, but for us, there isn’t enough back story. The point of the play is somewhat elusive as well, obscured in the disjointed jumping of years from scene to scene so that the action is out of order. Claire comes to see the Hollytrees after her relationship with Lucky has ended, then a couple of scenes later, we see how she and Lucky meet, for example. There isn’t any reason to jump around in time and the story would have more impact if told chronologically.

Also confusing is the use of nicknames for each of the three boys. Lucky also is Jimmy, Pat also is known as Tooth and John is Tojo. You really can end up scratching your head wondering what year you’re in and who’s on the stage. The result is that we’re too distracted to engage and the revelation of a tragedy out of order gives the play an early climax with no where to go.

Directed by Chris Henry, Michael Cullen is the standout here, creating a strong characterization of the blue-collar father working to support a family he doesn’t understand. Mead also is a ray of sunshine as the effervescent and wholesome Claire.

The Holllytrees’ shabby and dark home is interestingly designed by Alex Koch to incorporate the theater’s back wall and real windows while using scrim as part of the design on which to show a number of video projections. The open windows were welcome to help diffuse smoke and the rather overwhelming stench of numerous prop cigarettes used in the very small space.

Safe Home is being presented by Chris Henry and Royal Family Productions through Jan. 31 at the Women’s Interart Center, 500 W. 52nd St., NYC. Note that the address for this play was incorrectly listed at one point. The building you want is on the corner of 10th with a rather unassuming door for the entrance on 52nd. Tickets are $18 and may be purchased by calling 212-868-4444 or by visiting www.smartTix.com.
Christians might also like to know:
• Lord’s name taken in vain
• Language
• American flag dropped on the floor
Posted by LaurenYarger at 4:46 PM