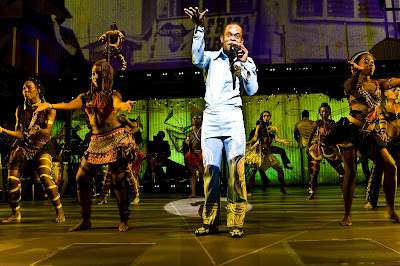 Sahr Ngaujah as Fela Kuti and the Broadway cast of FELA! Photo: Monique Carboni
Lots of Passion, Hip Action and a Club Atmosphere
By Lauren Yarger
Part news reel, part dance club, Broadway’s Fela! is a burst of energy and visual stimulation, but beyond providing two hours and 40 minutes of almost non-stop music, choreography and special effects, the show fails to move beyond that and bring home the main character as one who deserves such a celebration.

It’s one of those shows that’s entertaining while you are watching it, but which quickly fades once you leave the theater.

Part of my sense of detachment from the story of the Nigerian singer, sax player, band leader, club star-turned-politician, probably comes from the fact that I had never heard of him before this show. I don’t know whether this is from being too young to be aware of him at the time, a lack of news coverage about African music and Africa in general or the failure of high school and college history teachers to include Kuti’s influence on music and his establishment of the independent nation/commune of the Kalakuta Republic in the lesson plans (probably all three). The result, however, is the feeling that you’re attending a party where everyone is celebrating, but you’re not sure why.

It’s one exciting party, though, that much is clear. Bill T. Jones (conceiver/director/choreographer/book writer) tells Kuti’s story (Jim Lewis also co-conceived and co-wrote the book and additional lyrics) to the musician’s own African/Latin/Jazz beat (Aaron Johnson, musical direction) and lyrics in a stunning setting (Marina Draghici, set and amazing costume design) that explodes from the stage up the walls to the ceiling of the Eugene O’Neill Theatre, where I suggest you sit in the balcony so you can appreciate all the colors, lyrics, posters and projected images.

Jones also puts his dancers through an amazing workout. The moves evoke African tribal, tap and ballet dances and never stop. Two dancers move in the wings while the audience files in prior to the show so the action really starts before the action. At one point Fela, performed superbly and passionately by Sahr Ngaujah, gets the audience up on their feet and thrusting their hips to coordinates on an individual “clock” at his commands. This hip movement shows up in most of the choreography, and while I have nothing but respect for the dancers who make it look so easy (I would need hip replacement surgery after each show), I soon grew tired of having the cast flip their “six o’clocks” at me. (By the way, because the role of Fela is so strenuous, Kevin Mambo regularly takes over for some performances).

The monotonous few-note beat and few-word lyrics of Kuti’s music soon grew tedious for me despite the constant motion. I found my mind wandering, thankfully brought back to the stage by excellent visual and lighting effects. A poster turns into the image of Fela’s political activist mother Funmilayo (a belting Lillas White); a starburst follows her as she walks; rain falls across a scrim and all are exceptionally executed (Peter Nigrini; projection; Robert Wierzel, lighting).

In the middle of all the sensory stimulation, I couldn’t find enough to like about the character of Fela to engage and join in the celebration, however. He is inspired at one point by a woman he meets in a club, Sandra Isadore (Saycon Sengbloh). He goes to London to study. He’s influenced by African-American leaders of the 1960s and finally understands his mother’s political activism. He joins the cause against the corruption in Nigeria’s government which eventually results in his imprisonment and torture and his mother’s violent death.

He’s portrayed as a hero, and apparently he did help shape a form of music and give Nigerian people hope, but my introduction to a musician with a hit album called “Zombie’ proclaiming himself king of a commune nation made me scoff and think of him more as self-serving than as a great hero. Some of his actions, like using drugs and asking all the women in his life to marry him at once (apparently he married 27 wives in 1978 and then rotated them so as not to have more than 12 at a time until he finally divorced them all and died of complications from AIDS) are not exactly awe-inspiring.

So I’m sure other critics will love this show, and you’ll certainly see some well-deserved Tony nominations for Fela! come May, but for me, this musical felt more like being at a loud, flashy club with a bunch of people very excited about something I wasn’t relating to than sitting in theater enjoying a Broadway show.

Fela! runs at the O’Neill, 230 West 49th Street. For discounted tickets that benefit Masterwork Productions, click here (make sure you indicate the religious charity you wish to support is Masterworks).

Christians might also like to know:
• Show posts a Mature Advisory
• Language
• Violence/torture depicted
• Depiction of a man on a toilet relieving himself
• Consulting of other gods and speaking to the dead
• Song praises Allah
Posted by LaurenYarger at 7:37 AM