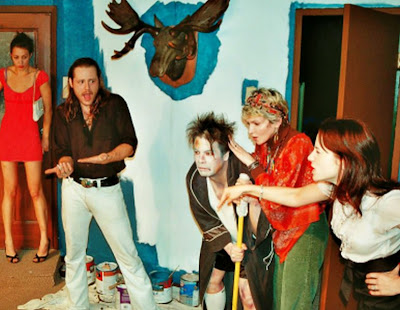 Dysfunction with a Ray of Sunshine

By Lauren Yarger
Yet another dysfunctional family has hit the boards of a New York theater, but with this play, amidst the yelling and backbiting, there’s hope that people can change and that an “I’m sorry” might actually mean something.

The show is Derek Ahonen’s Amerissiah, presented by The Amoralists theater company at the Gene Frankel Theatre in New York through Dec, 7.

Barry Ricewater (Adam Fujita) is dying of cancer and has become convinced that he is God who must die to save America. Creepy in his disease-ravaged appearance (think Edward Scissorhands) and screaming nonsensically at an invisible “Joey,” he gets around with help of a padded mop, his free spirited older wife Margi (Dierdre Brennan) and his family.

The clan meets at the Bronx boyhood home of the Ricewaters, where Barry was born on the living room floor, and where he wants to die (set design by Matthew Pilieci and Alfred Schatz). There’s his brother, Ricky (William Apps IV), who’s stopped using drugs and is trying to help his socially awkward and nervous girlfriend Lonnie (Selene Beretta in a nice turn) do the same. His sister Holly is angry at the world, especially at Margi for planting the “messiah” garbage in her brother’s head and at her ex Bernie (Matthew Pilieci) who won’t let her see her daughter. Their father, Johnny (George Walsh), is in denial about his son’s illness as well the fact that he and Holly might lose the family used-car empire and serve jail time for embezzlement and fraud.

“In my eyes, you’re forgiven,” the Amerissiah tells an unrepentant Holly, who never seems to stop yelling at everyone and who drinks to take off the edge.

Fighting ensues about whether Margi, whose other husbands died mysteriously, convinced Barry not to seek treatment for the cancer because she’s after his money. Past and present hurts caused by the family members and disagreement about whether to allow Barry to continue to think he’s God complete the dysfunction fest. In an attempt to force the truth, Holly challenges Barry’s claims and tells him that if he is God, he should have stopped the holocaust to which the Amerissiah replies that he did.

It’s this kind of humor and direction from Ahonen which allow each of the characters to be individuals while functioning as a strong ensemble (costumes by Ricky Lang also accomplish this). And there just might be something to Barry’s claims after all, when Terry and Carrie Murphy (James Kautz and Jennifer Fouche) arrive, led to the Amerissiah by a voice in Carrie’s head. Terry (in a very funny performance from Kautz) wants to channel his wife’s gift to get her a spread in People magazine, or even better, to give him six numbers to win the lottery.

Where Amerissiah differs from most of the family dysfunctional plots out there is that some healing takes place. Johnny finally comes to terms with Barry’s imminent death and the fact that he beat his son Ricky as a boy. His “I’m sorry,” seems to be the catalyst for a rebuilding of that relationship. Bernie and Holly have a heart-to-heart. She explains that she has sabotaged herself and their relationship because she craves anything that brings pleasure to her senses. Bernie, who appears to have a strong Christian faith, tells her that when you can’t see, smell or touch, the only thing left is the people who love you and we sense that the couple will reconcile if lawyer Bernie can keep Holly out of jail.

There’s even a strange miracle with a lot of evening sunlight (thanks to lighting director Jeremy Pape) that just might save them all.
For tickets, go to theatermania.com.

Christians might also want to know:
• Language
• God’s name taken in vain
• Use of drugs/alcohol depicted
• The AMORALISTS are a theatre company that produces work of no moral judgment, collaborating exclusively with American playwrights whose works are not concerned with the principals of right or wrong, good or bad, but rather full or empty.
Posted by LaurenYarger at 3:34 PM